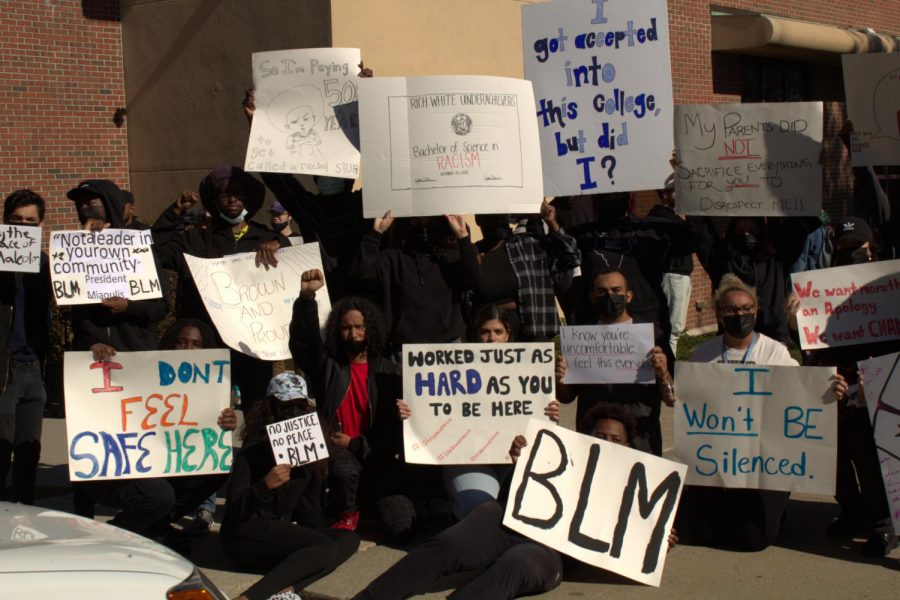 Students protested the university amid investigations into multiple bias incidents on campus on Saturday, Oct. 23.

A protest against RWU’s handling of recent racial bias incidents was held on Saturday during Homecoming Weekend festivities.

“It was a collective effort held by the [Black, Indigenous, People of Color] (BIPOC) students on campus,” said senior and protestor Dalton Sousa. “We have felt uncomfortable in this environment for generations, and we are not going to stand for it. We belong on this campus as much as any other student here. The protest was in response to this collective feeling of unwelcoming.”

Sophomore and protestor Amanda Dacruz said approximately 30 to 40 people participated in the protest. According to Dacruz, the protest happened in response to three racial bias incidents that occurred on campus in the weeks prior to Homecoming. Two incidents involved Resident Assistants of color being targeted by racial slurs and offensive language.

The third incident according to Dacruz involved RWU students in the stands at the field hockey Spirit Week game verbally attacking the only person of color on the opposing team. Dacruz said the students were removed from the stands.

“It was very clear to the people attending the game that it was racially charged and that one person of color on the opposing team was being [verbally] attacked,” Dacruz said.

In regard to the two incidents with the RA’s of color being verbally attacked, Sousa said, “It’s awful and not enough seems to have been done. We are all adults if people are not capable of understanding that they cannot use racial slurs, they should not be members of a college community.”

Starting at Maple Five around 9:30 a.m., the protestors marched to several RWU campus locations throughout the day, including the Campus Recreation Center, the administration building, CAS 157, back to the Recreation Center and finally the Intercultural Center.

Dacruz said the protest was done during the Saturday of Homecoming and Family Weekend because of the attention it would receive.

“With all of the prospective students that were coming in that day, we just wanted to make sure our message was clear, and that it wouldn’t get pushed under a rug,” said Dacruz. “Having all those people on campus that day was definitely a strong reason why we had it that specific weekend.”

During the protest, a list of demands was handed to people walking by. Dacruz said a lot of the demands were carried over from the Black Lives Matter protests at RWU last academic year, but more resurfaced and repolished to highlight specific matters going on now at the university.

Three of the demands were addressed in resolutions that had been proposed and passed at Monday night’s Senate meeting, including implicit bias training for faculty members, implementing a comprehensive anti-racism campaign across campus and hiring Student Life staff with “lived experiences.”

An email sent by Student Senate on Oct. 26 said “employees within the Division of Student Life impact all areas of student experiences on-campus including personal, social, emotional, and professional areas. With this understanding, employees should have lived experiences to aid in supporting members of the student body. This resolution will be presented to the Division of Student Life whenever a vacancy arises to continue to reflect the position of the Student Senate.”

Other demands were not addressed as much if at all by the Senate or Vice President of Student Life Dr. John King at Monday night’s meeting according to Dacruz.

“The rest of our demands we did press John King about and it was really heartbreaking because his answers to us were very vague,” said Dacruz.

Dacruz said the conversation and protest are ongoing.