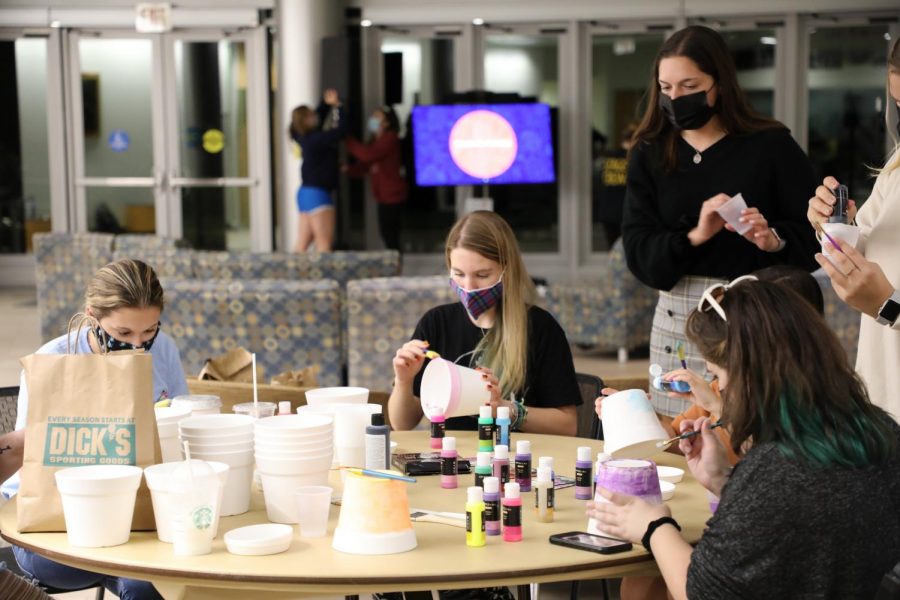 SAGA and MSU hosted the first event of Coming Out Week. The event consisted of a presentation on why Indigenous People's Day is important and ended with event goers planting plants that are indigenous to Rhode Island.

Ashlee Bartels, PR Chair of SAGA, and Jesahias Quiroa, President of MSU, commented on the event and the value of celebrating Indigenous culture. Quiroa explained the importance of the event.

“It’s something that a lot of people, and peoples in general, have not had the chance to really do openly, especially now that, like, we are very much focusing on different cultures and what else we can do, and even really analyzing history itself,” Quiroa said.

Bartels spoke about the planting of the indigenous plants that took place at the event.

“We decided to plant those plants because, first of all, we planted only native to Rhode Island plants obviously to not disrupt the biodiversity down by the Pokanoket Path, but we really wanted to honor the Pokanoket people in the best way we thought possible.”

Quiroa discussed why it is necessary to celebrate Indigenous Peoples’ Day.

“There is a lot of misconceptions about what this day means, especially here in Rhode Island because we are sitting on Indigneous lands, it’s even more important for us to recognize, and how Roger [Williams] implicated us in the genocide of Native Americans and it’s really important, espcially as clubs and orgs, that we set forth a diologue that is constructed to the whole community,” he said.

“I think that it’s important that we talk about those people, and their struggles and their stories, and their identities, and their beliefs because it’s something that, especially in America, has been washed away, and in many cases, on purpose washed away so that we don’t have to reflect on the sins of the past, or even try to find solutions for those sins,” Bartels said.

Bartels spoke on the importance of SAGA’s involvement in the Indigenous Peoples’ Day event.

Both made statements on the Land Acknowledgement made at the start of the event.

“A Land Acknowledgement is very key, especially because most of the time, a lot of the land that we have and owned especially with, like, colonization, wasn’t really ours to take, nor was it just sitting there to be, like, developed,” they said.

Quiora continued that a Land Acknowledgment states, “… not only do I acknowledge that this was originally your land and your peoples land, but I also acknowledge the pain and suffering that you had to go through to even just get us, or just the population to feel like, ‘oh yeah, this is yours.’”

“It’s just important to keep the conversation going, I know SAGA does a Land Acknowledgment at every single one of our meetings, and it’d be great to get all the clubs and orgs to do that, it’d be great to have the professors do that before classes, so it’s really just important to hold yourself accountable, and hold the people around you accountable, for being open and being inclusive,” she said.

Quiora talked about what individuals can do to show their respect to Indigenous people and their culture.

“Individually, I do think research is very important. Definitely going into those history books, or even sometimes going away from those history books, because that’s what really erases a lot of the actual American history, and again, I feel like it’s just sort of like doing your part to not only help yourself learn, but to also help others learn, and even help a lot of different cultures,” he said.

“It’s important that students recognize that they are welcome at Coming Out Week whether they are out completely, whether they’re out to certain groups of people, or even if they’re just allies,” Bartels said.