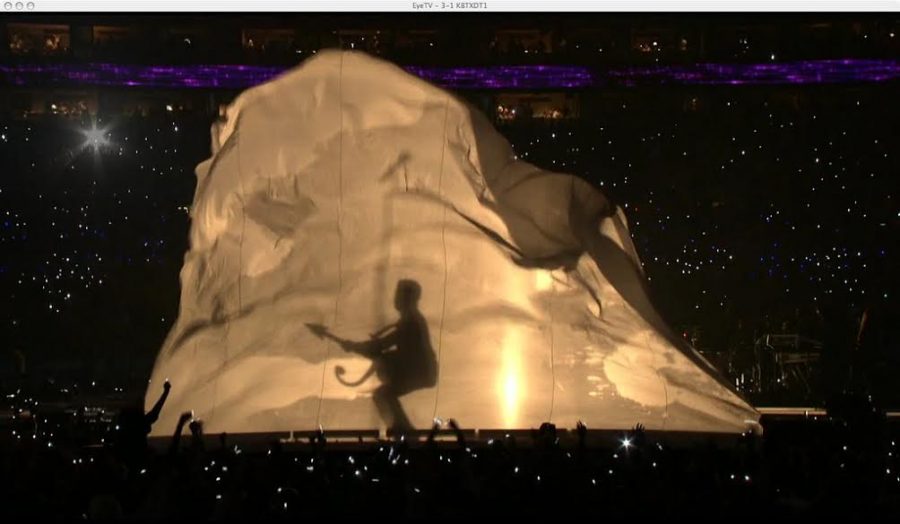 giant sheet shoots up and reveals a thirty-foot shadow of Prince during the 2007 Super Bowl halftime show.

With the Super Bowl coming up this weekend, it is a good time to look back at some of the most memorable halftime performances.

This halftime performance by The King of Pop is one of the most important of all time since it changed the culture around Super Bowl halftime shows. Prior to this Super Bowl, the halftime performance was never a big spectacle but when Jackson took the stage, that changed and suddenly people began tuning in for just the halftime show. The performance opened with Jackson jumping onto the stage to a roar from the crowd that literally lasted over a minute and a half. During this time, Jackson stood there like a statue. Jackson then began his set with a dance filled version of “Billie Jean.” After that, Jackson went into “Black or White” and finished the night with a medley of “We Are The World” and “Heal The World.” During this finale, Jackson was surrounded by 3,500 adolescents while a giant globe inflated from behind and the audience held paintings made by children of Los Angeles. Together, the paintings depicted kids of all races holding hands.

On Feb. 3, 2002, U2 took the stage for the halftime show at the 36th Super Bowl, only this one was a little different. Almost five months prior, the U.S. was attacked by foreign terrorists and the country was still mourning. The nation was looking for something to unite them and that is exactly what this British rock band did. The show started with “Beautiful Day” as Bono walked through the crowd and up to the stage. The song ended and “September 11, 2001″ appeared behind the band as they began to play “MLK” and move into “Where the Streets Have No Name.” As they played these songs, all the names of the people who died on 9/11 were projected behind them. Then, at the end of the performance, Bono opened his jacket and revealed an American flag lining.

This performance is famous not for any song or dance routine, but rather what happened in the final seconds of the performance. The set opened with Jackson performing “All For You” where she then disappeared and P Diddy and Nelly appeared to perform a mashup of songs including “Bad Boy for Life,” “Hot in Here” and “Mo Money Mo Problems.” Kid Rock proceeded to walk onstage and played “Bawitdaba” and “Cowboy” for the crowd. Finally, Jackson reappeared to the song “Rhythm Nation” and was joined by Justin Timberlake for “Rock Your Body” to close the set. As the two finished the song, however, Justin Timberlake “accidentally” (no one knows if it was planned) ripped off the piece of her outfit covering her breast. This moment “created” the idea of a wardrobe malfunction and is the reason that all live TV is on a three-second delay.

Considered the greatest halftime performance of all time, Prince’s show opened with a sample of “We Will Rock You” until Prince appeared on stage. His set consisted of “Let’s Go Crazy,” “1999” (interlude), “Baby I’m a Star,” “Proud Mary”(CCR), “All Along the Watchtower” (Bob Dylan, and Jimi Hendrix), “Best of You” and finished the set with a show-stopping rendition of Purple Rain with tons of solos mixed throughout. It was, however, the final song of the night that truly made this show so memorable. Not only did a giant sheet shoot up revealing a 30 foot shadow of Prince shredding his signature logo guitar, but the performance was done in what looked like literal purple rain. This show is the only one in Super Bowl history done in the rain and because of the purple lights, it appeared like the rain was purple.

This performance at the 43rd Super Bowl is considered to be one of the most energetic performances in Super Bowl history. Right off the bat, Springsteen came out with a ton of energy saying “ladies and gentlemen, for the next 12 minutes, we’re gonna bring the righteous and mighty power of the E Street Band into your beautiful home. I want you to step back from the guacamole dip. I want you to put the chicken fingers down and turn your television all the way up. And what I wanna know is, is there anybody alive out there, is there anybody alive out there!” He then broke into a small dance in which he dropped to his knees and jumped right back up. He went on to play hits such as “Tenth Avenue Freeze Out,” “Born to Run,” “Working on a Dream” and “Glory Days.” Plus, throughout the entire performance, at 59 years old, Springsteen just looked like he was having fun by sliding and dancing around the stage. He finished the performance by saying “I’m going to Disneyland.”

This 2013 halftime show is one of the best all-around performances we have seen at the Super Bowl. The set opened with a recorded speech from famed NFL Vince Lombardi when Queen B herself appeared onstage doing a snippet of “Love on Top” a capella. She went on to play many more hits including “Crazy in Love,” “Bootylicious,” “All the Single Ladies” and “Halo.” The performance featured amazing dance moves and breathtaking vocals, but what really put the show over the top was the arrival of Kelly Rowland and Michelle Williams — the other members of Destiny’s Child who joined her for “Bootylicious” and part of “Single Ladies.”

This Super Bowl halftime performance is one of the craziest in recent history, from costume and set changes, to special guests Lenny Kravitz and Missy Elliot, as well as the insane pyrotechnics. The show, however, was mostly memorable for two main reasons with the first being the opening. Perry began the set playing “Roar” while riding in on a giant tiger as it walked her across the field to the stage. There was also the famous left shark meme. During the performance, Perry had a beach-themed set with two dancing sharks. One of them looked like it had no idea what was going on and was dancing completely randomly. Pictures and videos of the infamous left shark flooded the internet for weeks after.

This performance, like Beyoncé’s, was amazing in every aspect. It had great dancing, beautiful singing, an awesome set and perfect costumes. The opening of the show, however, was what truly stood out. Gaga began the set on the roof of the stadium where she sang parts of “God Bless America” and “This Land is Your Land.” She then said the last lines of the Pledge of Allegiance before jumping off the roof and being lowered to the stage. Her set consisted of parts of “Edge of Glory,” “Poker Face,” “Million Reasons” and “Bad Romance.” She also went on to do an amazing performance of “Born This Way.”