Grant poised for a strong return 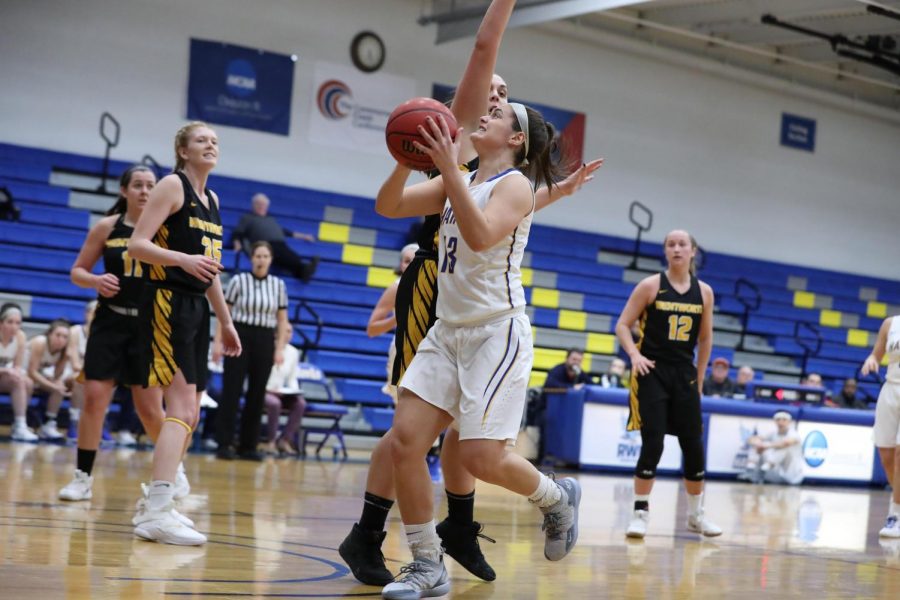 Alyssa Grant going in for a lay-up in a game on Jan. 3, 2019 against Wentworth before her injury.

The journey for women’s basketball senior co-captain Alyssa Grant has been full of the unexpected up to this point.

Grant came to RWU in the fall of 2017 as a member of a stacked team, one that holds the record for most wins in a season along with earning a berth to the NCAA Tournament.

“I came in as a freshman and we had a pretty loaded team. Heavy seniors,” Grant said. “It was good to learn from all the seniors and play where I can.”

With a lack of upperclassmen experiences her sophomore year, Grant found herself thrown into a larger role on the team — a far different experience than the year prior. When she was ready to capitalize on the opportunities from her sophomore season going into her junior year, everything that could have gone wrong went wrong.

During a pre-season pickup game, Grant landed on a teammate’s foot after driving to the basket, leaving her with a grade three high ankle sprain, effectively ending her season before it even started.

The next year would prove to be challenging for Grant. On top of the difficult rehab process, a pandemic cast a shadow over whether or not she would have an opportunity to play in her final season at RWU.

“It was pretty long and grueling. I went two times a week from December through the whole summer,” Grant said.

“I had to get needling done and it was pretty painful. They stick like three inch needles into your shins. It helped, but it was just a long process,” she said.

Throughout the process, Grant found herself relying on her close friends and teammates Sam Leone, Gabby Jerahian and Sam Mancinelli to stay motivated and gain support.

“I was really close with Sam and Gab, our seniors. Obviously, my roommate Sam Mancinelli. I would always talk to them about how I was feeling,” she said.

While Grant watched her teammates focus on their junior season, she couldn’t help but think about the future, specifically her senior season. But she thinks doing so benefitted her in the end.

“I think focusing on my senior year… helped me pull through it,” Grant said.

The return to live play can be nerve-racking for athletes coming off an injury. Thoughts of whether or not the hard work they endured during the rehab process will pay off find a way to make themselves present.

For Grant, there is no such fear.

“Right now, I feel really good. Better than I thought I would. It hasn’t really been bothering me,” Grant said.

Despite the uncertainty surrounding this season, Grant remains focused on returning to the court better than she was when she was forced to the sidelines last year.

“I want to do better. Just from a leadership standpoint, being a captain this year, it doesn’t matter what role it is,” Grant said. “I just want to be a leader on and off the court for my team.”