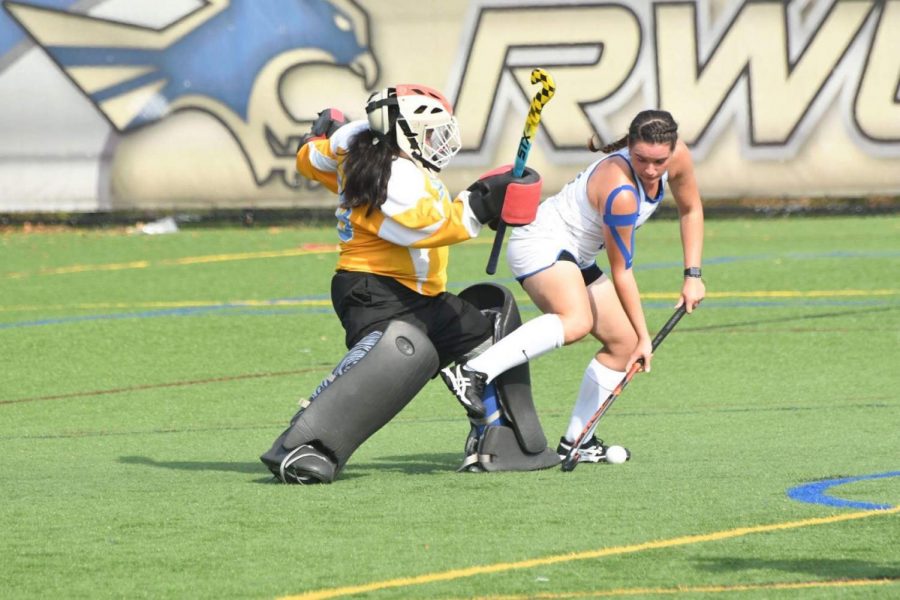 Goalie Mya Lunn has been the backbone to the field hockey team's defense for the past three seasons.

Many believe in the old sport adages, “defense wins ballgames,” and “you can’t win if you can’t score.” For Mya Lunn, those statements ring true. She is the sole goalie for the Roger Williams University field hockey team this season and has played all 848 minutes for the Hawks this fall.

As a goalkeeper, her main goal is to stop the other team from scoring. Lunn does all she can, with the help of her teammates, to keep the ball in front of the net.

“There’s definitely a stereotype. ‘Oh, all you do is move around the net,’ but I promise you it’s not just that. Your body has to move in ways it should not move,” Lunn said. “One minute I’m in a split—if you asked me to do that right now, it would not happen.”

Lunn is a junior from Marion, Massachusetts and is majoring in elementary education. She is currently working at the Rockwell School in Bristol as a third grade teaching assistant. She uses the time she has in this classroom to observe the host teacher and applies what she has learned by preparing and presenting lessons to small groups in the class. When she eventually has a class of her own, she hopes to teach second or third grade.

In eighth grade, Lunn picked up a stick for the first time. She was looking for an activity that would fill the gap in her schedule and allow her to keep playing sports year-round. That season exposed her to the game, but she was not sure if she wanted to keep playing in high school. After some convincing by her mom to try it some more, she found her way onto the freshman squad at Old Rochester Regional High School.

She started her high school career as a defender. When their team was looking for someone to fill a vacancy at goalie, Lunn noticed that no one else was stepping up, so she figured she would try it.

“The first couple times I did it, I wasn’t a huge fan of it,” Lunn said. “Then I started to actually understand it, and then I was like, ‘I’m kind of good at this,’ and then I fell in love with it.”

Lunn then devoted almost all of her time to field hockey, especially during the summer. She attended various camps and clinics, played on Lead the Way—a college showcase program—and even had private lessons with the goalie at the University of Massachusetts Dartmouth.

To be able to play entire games, Lunn must be well-conditioned. Goalie requires a lot of quickness, so she works on short sprints, footwork through ladders, and cone drills and burpees to be able to recover after a dive.

“I personally want to keep working on the conditioning [in the offseason] like increasing my speed and footwork. I don’t want to lose what I’ve worked hard for this season,” Lunn said. “I just want to keep everything up. I want to be 100 percent.”

A goalie has a much more vocal role on the field than one might think. She must direct her defense to force a player one way, to cover a certain player, or to clear the ball out of the striking circle.

As the only goalie, Lunn could easily crumble under pressure, but she has constantly held her composure, even under frustrating and disappointing situations.

The Hawks are going through a four-game losing streak but are confident they can turn it around entering their final five games of the season. They are currently 4-9 overall and 2-6 in Commonwealth Coast Conference matchups.

“We need to ignite the spark,” Lunn said. “We need to go all out. We can’t hold anything back.”