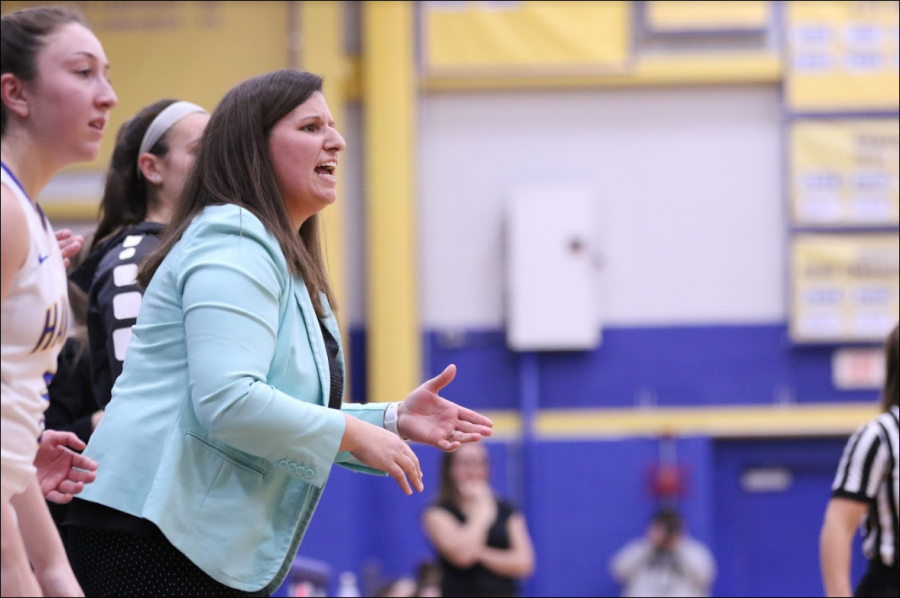 Roger Williams University women's basketball coach Kelly Thompson is but one of thousands of female N.C.A.A. head coaches that face difficulties due to Title IX.

Since its passage in 1972, Title IX has made great progress in terms of female athletic participation, but has fallen short in another category – the number of female coaches coaching female sports.

Title IX states that there must be gender equity in educational programming that receives federal funding. This law is closely related to athletics because it requires schools to provide the same opportunities for female athletes as it does for male athletes.

The number of female athletes has risen since 1972, which has caused an almost doubling of female sports teams and programs. This should create more opportunities for female coaches, but it has done just the opposite.

“I’m seeing the trend more and more that we have young female athletes coming to college that have never been coached by a female,” said Joyce Maudie, head softball coach. “I’d like to see us get those numbers punched back up.”

There are a variety of reasons that 59.8 percent of women’s teams have a male head coach, but women in the coaching field believe that this statistic can have a detrimental effect on female student-athletes.

Of 75 possible head coaching positions of female or co-ed sports in the Division III Commonwealth Coast Conference (CCC), only 41 of those positions are held by women. That is only about 55 percent.

Granted, the CCC does do better in terms of percentage than the overall N.C.A.A., but there is still room for improvement.

According to data compiled by the CCC, at RWU, there are eight female or co-ed sports. Of those possible coaching positions, five are currently filled by females.

Kiki Jacobs, Director of Athletics at RWU, feels that RWU and Division III are helping the national numbers, but in order to keep those percentages up and rising, athletic directors across the country need to hire women to fill the positions of female sport head coaches.

Jacobs and Kelly Thompson, head women’s basketball coach, have realized through their personal experiences at various levels of college athletics that men will apply to any position to get into college coaching, which makes it difficult for women to break into the field, especially if they are less qualified than the male candidate.

“It’s one of those things where we need to help correct it by hiring women even if it’s maybe not as qualified,” Jacobs said. “We also have to push women into the field.”

In addition to breaking into the field, the challenge for women already in the field is staying in coaching, especially when they have or are looking to start a family.

“I can definitely see where the struggle is for females especially when they have a child,” said Jon Egan, head wrestling coach and father of a three-year-old and two-week-old newborn. “I’m not going to pretend that I even do a sliver of what my wife does with raising our children.”

While RWU offers flexible paternal leave, the pressure and responsibilities of coaching sometimes become too much for a mom to handle.

“I think — I know, that a lot of my colleagues that have gotten out of coaching because of the stresses on their family life and trying to balance recruiting and just all the rigors that go into coaching a college team in any sport,” said Thompson, a mom of two young children.

The coaching situation gets interesting when the issue enters sports that have men’s and women’s teams that train and compete together. Some schools decide to hire co-coaches to focus on each gender, but most stick with one coach, and it usually is a male.

Matt Emmert, head coach of the men’s and women’s swimming and diving teams, argues that when it comes to co-ed sports, he feels that there is no coaching difference when dealing with males and females.

“Both men and women have different ways they need to be motivated and want to be pushed,” Emmert said. “The way I approach them is as individuals.”

He would be open to adding a female co-head coach to help split up the pressure of coaching over 50 student-athletes, but realizes the budget constraints of hiring another coach.

This issue does not have a simple solution, but to some there is no issue at all. Some female student-athletes, like the four women’s tennis captains, argue that it does not matter whether their coach is a male or female, but how they are as an individual and how they connect and respect the athletes.