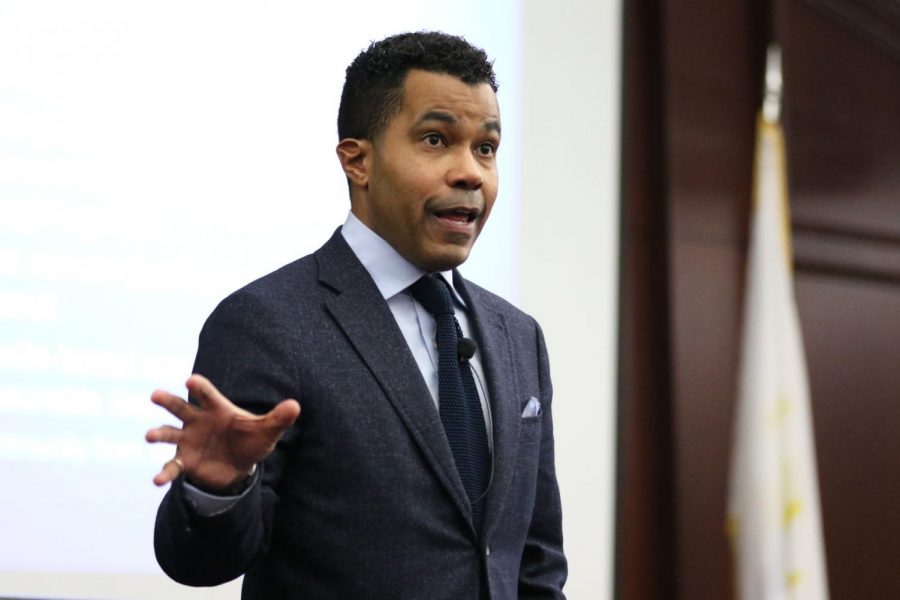 Ford speaks on his vision for a "Civil Rights 2.0 Movement."

Racism is far from gone in our society.

According to Richard Thompson Ford, George E. Osbourne Professor of Law at Stanford University, the answer to the issue of racism are far from simply eliminating discrimination. In fact, it is only a small piece of the puzzle.

On Feb. 5, Ford spoke to a crowd in the Appellate Courtroom at RWU’s Law School regarding issues surrounding the way that racism and sexism are dealt with in our society today.

“Right now, our overwhelming impulse is to think of any instance involving this type of social injustice as an individual injury involving an individual bad actor and an individual victim,” Ford said. “I suggest that we would make better progress as a society if we thought of it as a systemic set of injuries as a result of the culture in which both responsibility and injury are diffused.”

Ford noted that he was not suggesting we abandon the civil rights end to discrimination, but stated that this should not be the only way we approach problems of social injustice.

Ford began talking about the devastation caused by Hurricane Katrina in 2005, and noted that the inadequate response on the part of the federal government was “colored by politics,” stating that the people of New Orleans were most likely not supporters of the Republican party.

These details led to “an understandable claim of racial injustice,” said Ford. “After the hurricane hit… it was quite clear that the African American communities suffered a disproportionate brunt of the aftermath.”

After describing the responses Hurricane Katrina generated regarding issues of racism, Ford began to introduce the topics he would address in his talk, and explained his ideas for a “Civil Rights 2.0” movement.

“Racial injustices were, and are, everywhere,” Ford said.

He explained that these injustices exist in policing and the criminal justice system. Racial profiling, employment discrimination, and segregation in public schools and neighborhoods are all topics that Ford addressed during his lecture.

For example, he spoke about the Black Lives Matter movement, and noted that “we’re looking for a specific individual to blame for the problem of police violence when we ought to be and need to be looking for institutional and cultural factors that produce an environment in which that kind of violence is almost inevitable.”

BLM has drawn our attention to the problem of racial injustice, but it’s certainly not a new concept. Ford noted that past instances of police violence against African Americans has sparked outrage… and yet the problem still exists.

“Every one of which generated an outcry and a promise to fix the problem and was described as a wake up call, and every one of which failed to do so,” said Ford. “We’re still fighting the same fight 50 to 60 years later.”

The answers to these problems and many others, according to Ford, are outside the walls of eliminating discrimination.

He mentioned that in some cases, discrimination can be very hard to prove.

“In part because the structural and cultural and institutional features that generate these inequities operate even when people aren’t, in fact, discriminating.” said Ford.

So, what is the solution? According to Ford, judges and bureaucrats need assistance in creating effective solutions to these problems. He also suggested we “make police and employers allies in the common struggle, not enemies we struggle against.”

According to Ford, another key to improving equality in our society is resistance to racism and hate, two concepts that many would argue have been demonstrated by the current president, Donald Trump, and his administration.

In an interview with The Hawks’ Herald, Ford stated that the resistance to this kind of racism has the potential to reinvigorate aspects of our democracy that needed reinvigorating even before Trump came along.

Ford noted that Trump’s reaction to topics such as immigration, race, and gender are making people think through exactly what the nation stands for.

He also expressed that it is important to seek to understand the people who support Trump so that opponents of the current president’s policies can better understand the frustrations of people who agree with him and express civility. Ford said that allowing for civil discourse and disagreement on issues where there is room for legitimate disagreement, while at the same time hardlining against racism and other lines Trump has crossed, is extremely important.