Player Perspectives: Shipping Up To Boston 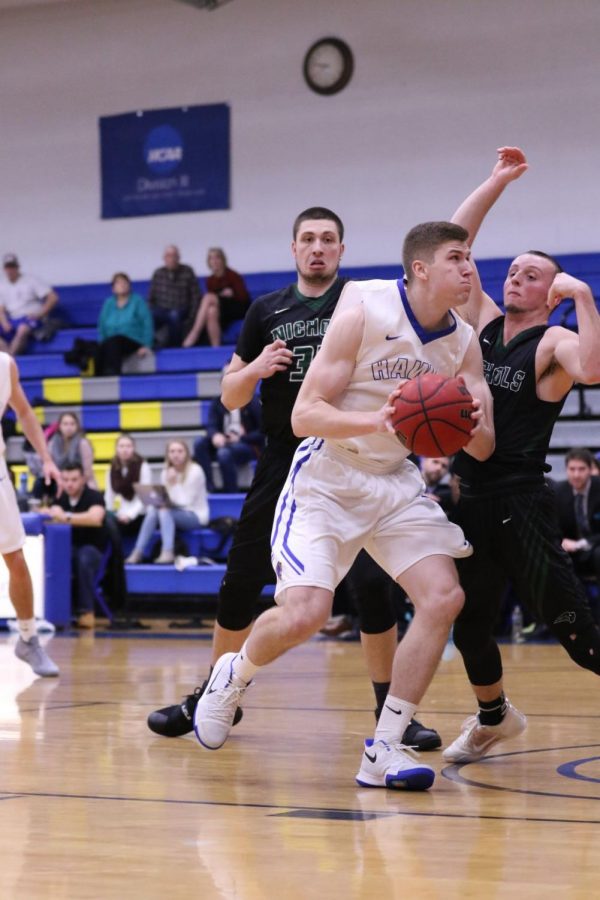 Freshman forward Andrew Hart goes up for a shot vs. Nichols College on Dec. 5.

As a freshman forward on the men’s basketball team, the transition to college basketball was definitely an experience to remember. Some things don’t really change through different levels of sports, though. Most sports fans know that a season is full of ups and downs, especially in terms of injuries. We were bit by the injury bug this week along with traveling to Wentworth Institute of Technology to avenge a 66-60 loss in January.

Due to the onslaught of injuries and start of classes, our practices last week were cut shorter. At the same time, we still had to maximize the time we had in order to prepare for the upcoming game.

In the three practices we had between our game against Salve Regina and WIT, practices were focused around defending ball screens, post players, and attacking a 1-3-1 zone.

We arrived at WIT around 11:30 a.m. Since we traveled with the girls and their game was at 1 o’clock, we walked around Boston to get some food. When we returned for the tip-off, the team watched until halftime. After the buzzer sounded, we went into the locker room and started our routine game prep.

Now, one would think that a college would supply an actual locker room to their visitors, but that was not the case here. Instead, we were crammed into a room off to the side of a hallway, which actually turned out to be the storage room for the WIT men’s baseball team. When I say that it was a struggle to get changed, it was. Imagine about 20 people ranging from 6-foot to 6-foot-7 crammed inside a room that is no bigger than a quad room in our Cedar dorms.

This only added fuel to the fire. Our assistant coach Josh Peterson kept saying, “Use this to our advantage, use this.”

We were already psyched at a chance for revenge, especially on their senior day. Also, we found out from our coaches that WIT had gained a conference win after they lost to an Eastern Nazarene team with an ineligible player. That win put the Leopards a game above us in the standings, and we wanted to make sure it wasn’t going to stay that way for any longer.

The first 10 minutes were neck and neck between our teams until the 10:40 mark when WIT’s leading scorer, Jason Ganley, exited the game with his second foul. With the Leopards’ best player off the floor, their offense started to show the effects which helped us build a seven-point lead going into halftime at 34-27.

In the few minutes before the coaches entered the locker room, the team was really emphasizing our effort on defense saying, “Our defense is leading to our offensive opportunities.”

In addition, we kept stressing that we needed to come out even more intense in the second-half. We knew that WIT wasn’t going to roll over, especially on their senior day, and being on the road without any RWU students in the stands, we needed to bring our own energy.

After some slight adjustments to ball screen defense, we headed back to the floor to earn our ninth conference win of the season. WIT came out with a quick four points and cut our lead to three points. After baskets were exchanged for the next few possessions, the game was tied at 47 with 11:38 left. After a 3-pointer by freshman Bryan Donovan and two steals by junior Jake Heaton, we went on a 12-0 run and WIT was never able to recover. Eventually, we stretched the lead to 17 and ended with a 72-58 win.

We were extremely pumped for the win. The win moved us to fourth in the CCC, over WIT, and was now our fourth straight win. Given all the injuries that we’ve suffered the past week, we knew we stepped up big this week.

At the same time, it was just another win on the road. With the CCC playoffs creeping around the corner, and four more conference games left, everything matters. Every rep in practice, every extra shot, every second could be the difference between a home playoff game or a road playoff game. Let’s lock in.