Off the board: A closer look at RWU’s divers 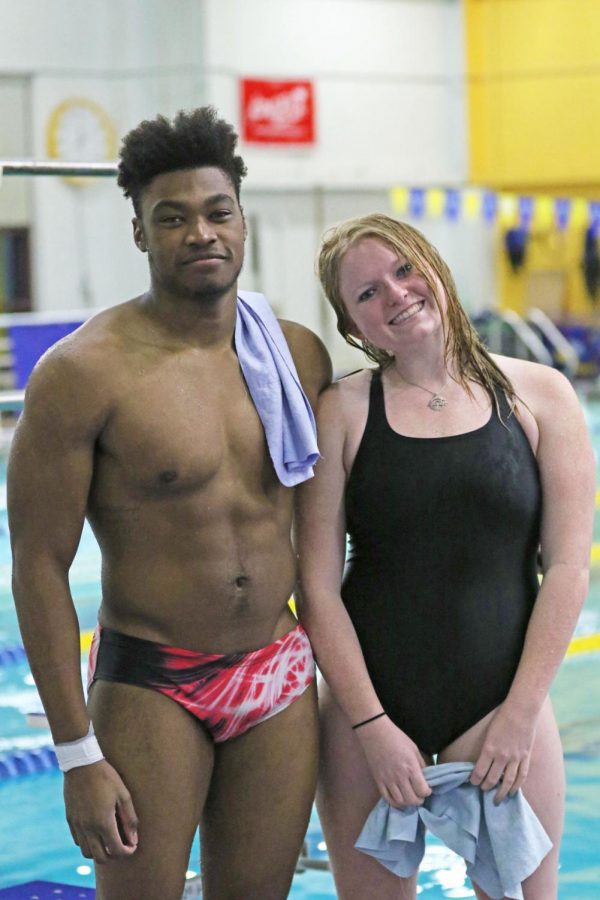 Brooke Britt takes a breath, attempting to calm her nerves and clear her mind as she prepares to execute a diving routine that she’s practiced for the past hour.

She places her feet perfectly aligned together on the board, taking in one last deep breath. She opens her eyes, takes three big steps and leaps off the diving board into the air. Suddenly—everything’s a blur. She surfaces from underneath the cool water with a smile on her face, knowing she finally carried out her routine perfectly.

“Confidence is so important, you have to go on the board thinking, ‘I’ve done this before. Don’t rush it,’” the sophomore diver said.

As the Roger Williams University men’s swimming and diving team is off to the New England Interscholastic Swimming and Diving Association (NEISDA) Championship starting on Feb. 15 at the University of Rhode Island, Britt and her teammates have been focused on aiding the men in preparing for the upcoming competition; specifically, getting their proper diving techniques in order.

According to Britt, diving is a very different sport that requires flexibility, patience and a strong core.

“A lot of people are afraid to do it, but when you have the motivation to get up on board and try and achieve a half twist or full flip around, it is amazing,” she says.

She also described how the sport itself is so individual, but equally supportive.

With team camaraderie being the motivator, Britt and the rest of the women’s team hope to help teammates Connor Lautenschlager and Josh Seabrook properly prepare in the coming days before the diver duo represents the men’s team in the NEISDA Championship next week.

Lautenschlager, a senior captain, was a four-year diver in high school and All-Conference. Seabrook however, a junior, took a slightly different path. He began his diving career back in high school, but it was an initial experience with gymnastics that led him to giving diving a try. The similarities in movement between the two sports, however, made Seabrook give diving a shot.

“At first, I didn’t like diving,” Seabrook said. “I had done gymnastics my whole life, but when my friends and teammates suggested it I was like, ‘Hey, why not give it a try?’”

He quickly realized that diving was not difficult compared to gymnastics.

“It came natural to me so I stuck with it,” he said.

During practices, Seabrook has been able to better focus on his dives and perfect them with the help of  Britt and assistant coach Lindsay Moore. Moore was formerly a high-level gymnast until she was a freshman in high school. A bad back injury forced her out of gymnastics, but eventually started her diving career. Her experience in both sports aided Seabrook along in perfecting his diving techniques.

Moore explained that diving is a technique specific sport, and also that every diver is different and has their own technique.

“For each dive, there are different techniques that certain coaches prefer or teach more frequently,” Moore said. “Also, it can just be how the diver themselves finds a technique that works best for them.”

Beyond the physical challenges of achieving proper technique, diving is also mentally demanding, according to Moore.

“Divers should keep in mind what they have done to prepare for a meet,” she said. “Trust in your instinct, and training. Taking a deep breath and stepping back to relax and refocus is sometimes the best way to mentally get through a practice or meet.”

Seabrook has his own method to conquer the stress and nerves.

“It’s hard to control nerves,” he said. “Usually during meets I breathe in and out twice before I am about to dive. I do this in order to calm every nerve before I go to clear my head.”

As the NEISDA Championship inches closer, Lautenschlager spoke on his excitement for the chance to place in the top three once again.

“I am looking forward to the guys team potentially being repeat champions,” he said. “That would be huge for this program as we look to continue to grow. Also looking for a strong performance on the divers’ part. Hopefully two top three finishes from both Josh and I.”

For Lautenschlager, the nerves haven’t kicked in. He remains bittersweet. His long stay in the program has been a crazy experience, he said, but he doesn’t regret it one bit. Before Lautenschlager competes in the final meets of his college career, he left the returning swimmers with only three words of advice.