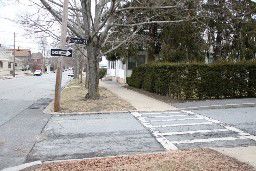 The two RWU students were at this crosswalk when they were hit by the alleged drunk driver.

A 20-year-old Roger Williams University student was arrested on a charge of driving under the influence after hitting two pedestrians walking in a crosswalk in Bristol on the evening of Feb. 1.

Both pedestrians are RWU students, and the University Registrar was able to confirm that the driver is also a student at the university.

The Bristol Police Department says that Michael Shea was driving a tan 2003 Chevrolet Silverado that hit two 21-year-old men in the crosswalk at the intersection of Bourne Street and High Street at approximately 11 p.m.

Shea was charged with DWI, first offense, and refusal to submit to a chemical test.

His arraignment is scheduled to take place in the District Court in Providence on Wednesday, Feb. 14.

The crash report by Patrol Officer Barry Carinha indicates that both students were walking in a clearly marked crosswalk when the vehicle struck them.

The pedestrians who were hit have both been confirmed to be RWU students, but asked not to be named when contacted by The Hawks’ Herald. The Herald has a policy of not naming victims unless under significant circumstances.

Carinha’s report said the vehicle’s “front bumper and hood area struck both pedestrians, causing them to be pushed to the ground,” and that the driver stopped “immediately upon impact and shifted the vehicle into park.”

Both students were treated at Rhode Island Hospital for their injuries.

The report also gave details regarding witnesses who “assisted both pedestrians and escorted them back to 10 Bourne St.,” which was roughly 100 feet away from the scene of the accident. Carinha’s report mentioned that one witness took the keys from the driver to prevent him from leaving the scene.

When patrol units arrived, Carinha took photos of the injuries sustained by the pedestrians and also of the scene itself, as stated in the report.

Shea failed a field sobriety test and was taken into custody.

According to Police Captain Brian Burke, one of the students was transported from the scene with minor lacerations and abrasions. The other refused transport on scene, but was later taken to the hospital by Bristol Rescue after he called and complained of pain.

When contacted by The Hawks’ Herald, one of the injured students commented, “Don’t drive drunk. Think twice before you get behind the wheel.”