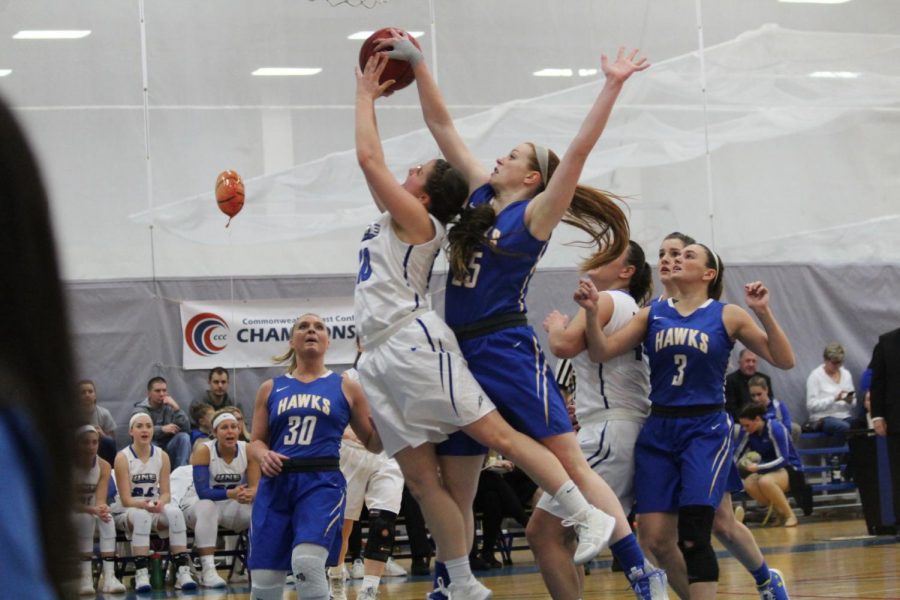 Senior Teagan Dunn blocks a shot on defense against UNE on Feb. 24 during the CCC championship game.

The Roger Williams University men’s and women’s basketball teams came up short in the Commonwealth Coast Conference (CCC) Tournament over the weekend.

The men’s team ventured to Nichols College in Dudley, Massachusetts for a Thursday night date with the defending champion Bison in a semifinal matchup.

The Hawks came out of the gate red hot and aggressive to start the contest, shooting 50 percent in the first half en route to a 47-39 halftime lead. The normally loud and berserk Bison’s Den was — for the most part — kept quiet.

In the second half, the Hawks began to run out of gas and suffered a number of breakdowns defensively as a result. The Hawks were outscored 50-28 in the second half, with half of the points coming from Bison star DeAnte Bruton.

Bruton hit 10-of-13 shots in the second half for 25 points, including several big-time 3-pointers to climb back into the fight. He finished the game with 34 points and 10 rebounds in an 89-75 verdict for Nichols.

The Hawks were led by their quartet of captains; seniors Conor O’Brien, Jaylen Jennings, and Nick Marini, as well as junior Austin Coene.

O’Brien led the Hawks with 18 points while Coene, Jennings, and Marini each added 17 points.

The Hawks finished the season at 18-9.

The women succeeded in their semifinal matchup last Thursday, defeating the third-seeded Endicott College Gulls at home 58-50 and advanced to the CCC championship game vs. top-seeded University of New England.

RWU trekked to Biddeford, Maine on Saturday hoping to keep the Nor’easters from earning their sixth straight CCC title.

From the first quarter onward however, the Hawks simply looked outmatched.

RWU got off to a poor start in the opening quarter, trailing 23-9 after 10 minutes, and never got a chance to recover.

RWU shot 27 percent on the game and committed 15 turnovers that led to 22 UNE points. The Hawks never led and trailed by as much as 27 in the second half and succumbed to the Nor’easters by a final score of 59-40.

Senior Mariah Nicholas was the lone Hawk that did have a good game, tallying 19 points and seven rebounds, but did have five turnovers as well.

Despite losing in the title game, RWU had good enough of a season to earn an at-large bid to the Division III N.C.A.A. Tournament — the second time in team history.

The Hawks go the Big Dance after earning a single-season record 23 victories.

They will travel to Mechanicsburg, Pennsylvania for a first round game vs. Emory & Henry College on Friday, March 2.