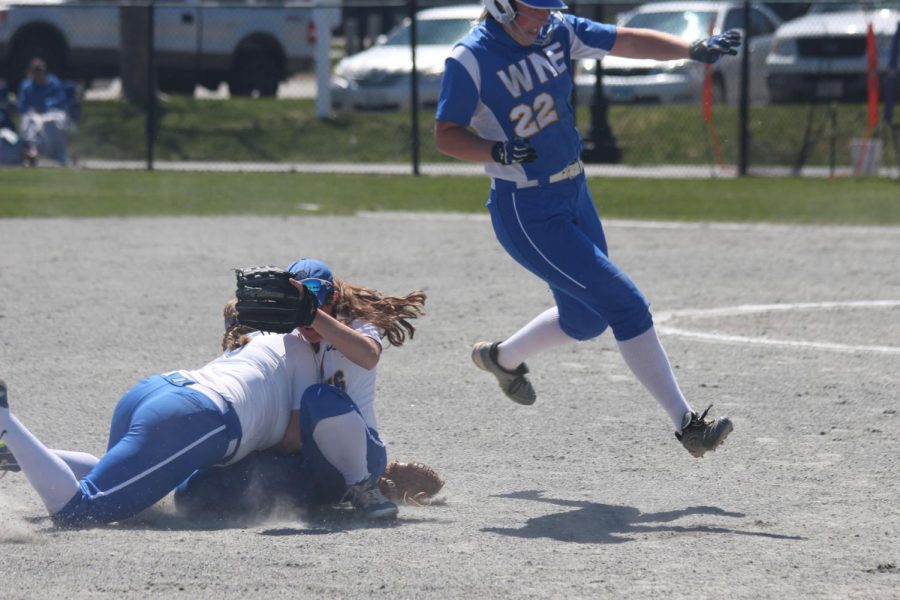 A tough season for the Roger Williams University softball team took an even bigger blow with the loss of starting pitcher Alyssa Murray. The sophomore missed the remainder of the regular season due to a non-injury related surgery, according to a team member. The pitcher started in nine of the team’s 10 Commonwealth Coast Conference (CCC) games at the time and had an Earned Runs Average (ERA) of 2.48.

The other two leading pitchers for the team this year were sophomore Rachel Wandzilak and junior Hailey Prechtel. Before the team’s final four games, Wandzilak had started in five CCC games and posted a 6.92 ERA in 29.1 innings pitched. Prechtel had started in four games while appearing in seven and had posted a 5.49 ERA in 21.2 innings pitched. In their final four conference games of the year, these two had most of the weight of the postseason on their shoulders.

Before their last four games, the team stood at 4-9-1 in conference play. The tie, once planned to be finished at a later date, was left alone and counted toward the win percentage in the CCC standings. In their final four games, the Hawks needed just two wins for a shot at a playoff spot.

On Saturday, the team visited the second-place Eastern Nazarene College Lions, who were already guaranteed a playoff spot with their 11-3 conference record. The Hawks took a 6-1 lead into the bottom of the seventh inning before they surrendered two runs. With runners on first and second, the tying run for the Lions was at the plate.

A pitch to Eastern Nazarene sophomore Elisabeth Schaffer was popped up to RWU junior Bella Malvinni who caught the ball to end the first game of the doubleheader. The catch secured a much-needed 6-3 win for the Hawks.

The next game belonged to the Lions by the bottom of the second. Facing a four-run deficit, the Hawks put up just one run in the top of the third. The Lions tacked on three more and split the doubleheader, leaving the Hawks in a must-win situation on senior day against Western New England University.

Just one day later, the Hawks played their last two conference games of the season in a doubleheader against the Golden Bears of WNE. With the playoff race tightening, the Hawks needed one win to grab at least the eighth and final seed of the playoffs.

By the bottom of the fifth, the Golden Bears had a 5-0 lead. The Hawks fired back with one and headed into the sixth inning, where they added another to make it 5-2. The comeback fell short and the home team’s season came down to one final conference game.

In just five innings, the Golden Bears ended the game with a 8-0 win, putting the Hawks at a 5-12-1 conference record — just one win separating them from the eighth-seeded Gordon.

For the two seniors on the team, Val Moran and Haley Ledbetter, it means that they have finished playing softball in the CCC for Roger Williams University.

“It’s tough considering we made it so far every year,” Moran said on missing the playoffs.

For the Hawks, the loss means that the team will miss the postseason for the first time since Joyce Maudie took over as head coach in 2011.

“Even though we didn’t make it,” Moran said, “I have to say this is one of my favorite teams to play with.”