Re-examining the term “people of color” 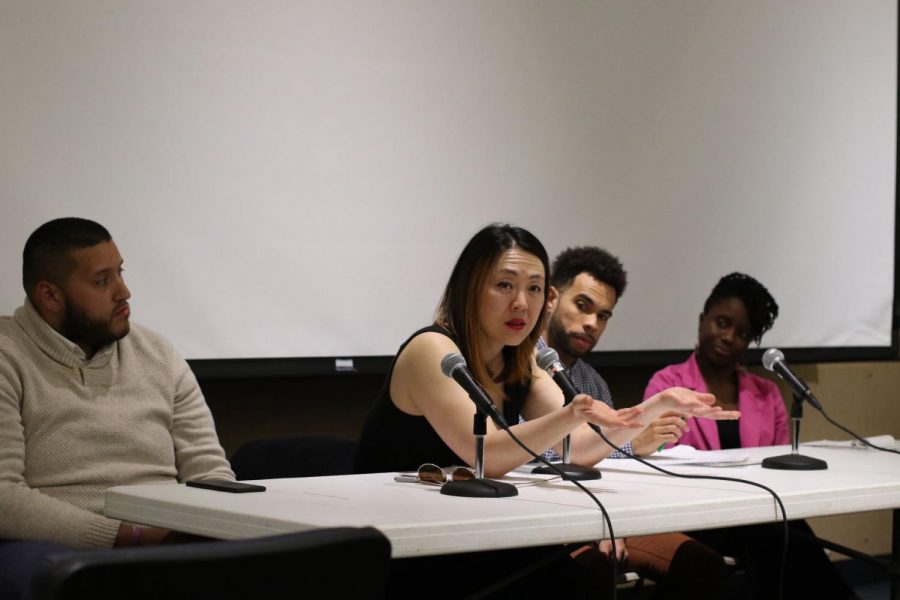 The panelists discuss the history of the term, linking it to the power relations embedded in its use.

You’ve heard the term “people of color,” but have you ever thought about what the term actually means, or the effect it has on individuals of minority identities?

In the first event of the Multicultural Student Union’s “Stay Woke” series, a panel helped to host “People of Color: Descriptive or Discriminative” and opened the floor to begin the discussion about the true meaning behind this seemingly-inclusive term.

The panelists included: Taino Palermo, director of Community Development Program at RWU’s School of Continuing Studies; MiNa Chung, associate director of the RWU Intercultural Center; Aaron Allen, assistant professor of American studies at RWU; and Kamille Gentles-Peart, associate professor of communication and media studies at RWU, and chair of the Department of Communications.

The panel discussion was moderated by Raymond Two Hawks Watson, who helped break the crowd out of their shells and encouraged audience members to become a part of the conversation just as much as the panelists were. Watson then made the point that this event would be the start of a dialogue.

“Our real intent is to raise awareness,” said Watson.

Before answering questions, each panelist began with an introduction on what the term “people of color” means to them.

Gentles-Peart talked about the right to name oneself, and how stripping a person of that right is used as a “weapon of oppression.” She also mentioned that the name did not come out of the “so-called communities of color.” In fact, the origin of the term “people of color” is from a term that came about in the 1800s: “colored people.” Because it was derogatory, people of color shifted it as a way to try to reclaim their humanity.

“But that inversion and that shift did not change who did the naming,” Gentles-Peart said. “It’s still a name that came out of white supremacists’ ideas.”

She added, “The term does not challenge the standpoint of whiteness. It still does not give minoritized racial groups the right to name themselves.”

As for using the term, Gentles-Peart suggests using it critically, and, when in doubt, call people by their names specifically.

Allen agreed with Gentles-Peart, and said we need to be thinking critically about the term and the work it’s doing, as well as being very intentional when using it.

He referenced a “Black Power” speech by Stokely Carmichael in 1966, in which Carmichael said, “It is the word ‘black’ that bothers people in this country.”

Allen noted that he hears the term particularly in the classroom, and sometimes interprets it as “students’ inability to use the word ‘black’ when they’re talking about black people.”

“When we hear ‘black,’ it oftentimes invokes either derogatory or stereotypical ideas of blackness as a version of inhumanity,” Allen said.

He also said that the term “black” singles out a certain group of people, and “people of color” is widely considered to be a more inclusive term.

Chung spoke on her own personal experience and growth.

“Claiming the term ‘people of color’ has been a process of empowerment,” she said.

For Palermo, “people of color” is a “sliding scale” of a term.

“You can dice people up into however many categories you want, but I think it’s all tied to how you term things, frame things, and then attach policies to it,” Palermo said.

What it all comes down to, he said, is uniformed and disconnected policies, and people suffer from that.

Toward the end of the discussion, Watson asked the audience and panel why the term “people of color” doesn’t include white people in it.

Junior Phoebe Thaler, a member in the audience, shared some insight. She noted that when one group is considered “the norm” and another group, or several groups, are considered to be “different,” then they don’t get noticed as much.

“The term is to talk about the different groups,” Thaler said. “When something is the norm, it just is, and the different thing, no one notices.”

As the event came to an end, Gentles-Peart prompted the audience and her fellow panelists to “de-center sameness.”

“We don’t have to rely on a kind of sameness,” Gentles-Peart said. “I think we’ll be okay if we say that we’re different.”