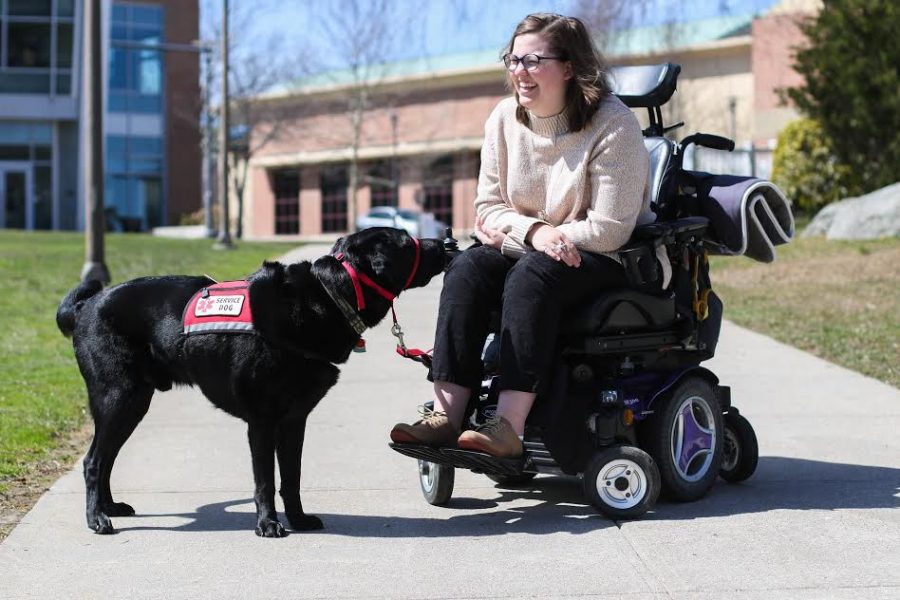 Finding a student on RWU’s campus who breaks out of the typical mold of majors is not an everyday discovery. This is a distinct feature that makes senior Tori Davis so unique. Pursuing an individualized major of science communications, she has worked diligently to merge her passions together into a field that she will enjoy.

Upon starting school here, Davis did not know that she wanted to embark on a specialized major, let alone realize that it could be done. She came in as a biology major but experienced a few setbacks in lab settings due to her genetic condition, Ehlers-Danlos syndrome (EDS), which is a connective tissue disorder that causes her joints to dislocate. Despite any struggles, she was determined to follow her dreams, so she reevaluated them slightly. Knowing she wanted to practice science and make a difference, she decided to go into writing and take whatever science classes she could.

“When I talked to my favorite professor and current advisor, Dale Leavitt, at the time, I could see the spark light up in his eyes,” Davis said. “He had been waiting for a student who wanted to write about science to come along, so that he and the wonderful Professor Michael Scully could create an interdisciplinary major.”

Since then, she has been taking a combination of science and communications courses. When asked which were her favorites, she listed a range of classes. She loved the Scientific Illustration course that she took in order to learn how to properly depict specimens, which allowed her to go on a trip to the Roger Williams Park Zoo. Davis also enjoyed her Marine Biology class and gained more science writing skills in her News 2 course last year, when she wrote her thesis on EDS.

Her degree can lead to many pathways following graduation. However, Davis has specific goals in mind for her future career.

“My vision is to work for a paper or magazine as their science writer, or better yet, write for a science magazine,” she said.

This summer, Davis actually plans to intern at one of the top science magazines in Washington D.C. Joking around about other possibilities, she added, “I’m not opposed to broadcast either, although, I fear due to my being as white as Wonder Bread, that I won’t show up on camera once I’m under all of that harsh lighting.

Davis also has other commitments on campus besides her major. Last year, she was the Arts and Culture chair for the Campus Entertainment Network (CEN), and she now floats around to club meetings and events that interest her most when she has time to attend. She was very active in extracurriculars for the past 3 years, and now that she is a senior, she is taking the time to relax and enjoy the end of her journey. However, she is still involved in CEN, Sexuality Advocacy for Everyone (SAFE), and Alternative Entertainment.

Connecting school life close to home, a huge part of Davis’ experience here as a student involves including her service dog, Tony, in her daily activities. He recently turned four years old, and she cannot imagine her life without him. She was scared to do things alone before she had Tony, but now she feels confident in going where she wants to go, being that it is wheelchair accessible, as she knows she is never alone.

“I know Tony is always there to look out for me,” she said. “So I think because he has become such a big part of my life, that I don’t even think twice about whether or not to present myself as just me; it’s always Tori and Tony. He has saved my life enough times that I think he deserves the credit in all things we do.”

The community fostered at RWU is something close to Davis’ heart as well. She appreciates that rolling around the sidewalks with Tony leads to them encountering at least half a dozen people they know. She also has a great admiration for the maintenance and facilities staff on campus.

“They are always willing to help fix whatever oddball request I have and I think without a doubt they are the unsung heroes of this campus,” Davis said. “If maintenance all took a day off it would be chaos abound.”

In terms of her least favorite aspects of campus, she wishes that the Intercultural Center was more accessible. She would love to spend more time there, but the multipurpose room is small and she cannot get upstairs. Davis also mentioned that if she could change one thing about Roger, she would give it a student union.

When college is said and done, Davis aims to write pieces that are understood and appreciated by scientists and the rest of the population. She knows that science brings about life altering advancements, and she “wants people who hate science and believe it is a hoax to be able to read what [she] write[s] and understand it, and hopefully want to learn more.” Undoubtedly, she will execute this with intense dedication, and Tony, by her side.