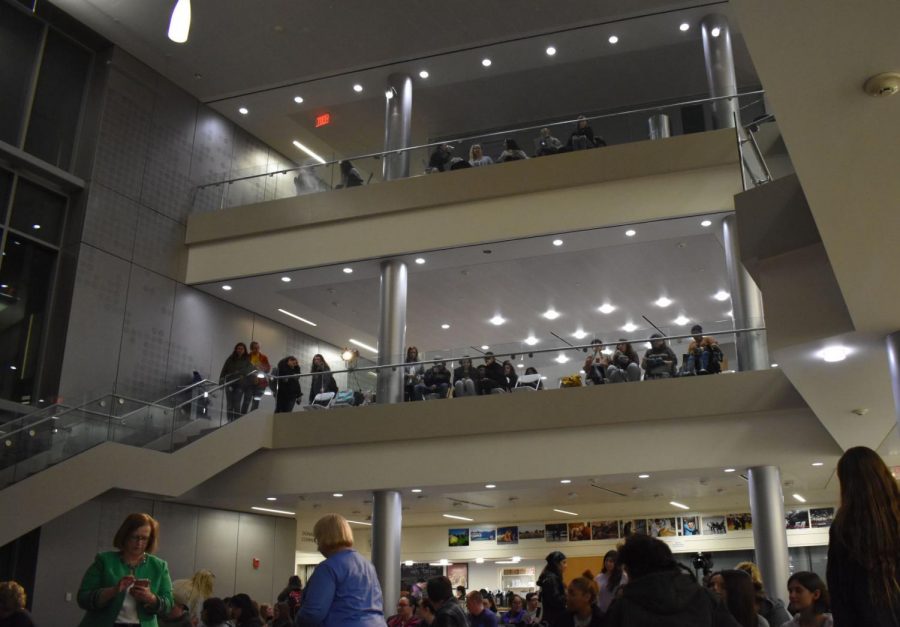 The poem was a satire piece that discussed a bath bomb perfect for hypocritical racists. Presented like an ad, the poem had the audience laughing, snapping and standing in applause.

Students covered all three floors of the Global Heritage Hall on Thursday, Nov. 8 for the 19th bi-annual Poetry Slam. The Slam, one of the most highly attended events on campus, takes place each semester and features both new and experienced slammers. Poems can be about personal events, politics or even baking cookies. Audience members are encouraged to engage with the slammers to make their feelings heard.

To start, each slammer performs one individual poem. Judges rate them from 1 to 10, with 40 percent of the score being based on performance and 60 percent based on content. Once the scores are tallied, the three highest scores will advance to the second round in addition to one “judge’s favorite.”

Freshman Dorian Page was the first to kick off the night with a score of 34.5 followed by senior Lauren Calabrese.

Freshman and first time slammer Kara Rydelek, who scored the highest in the first round, grabbed audience’s attention by performing her first piece in a hot dog suit — a costume she has been wearing since childhood.

As the highest scorer of round one, Rydelek was the first to perform in round two, followed by Lawlor, Melissa Mota, Madi Benoit and the judge’s slammer of choice, Skyler Moncada.

Lawlor, who is a junior political science major, took first place, Rydelek placed second and Mota, who is a senior, placed third.

This slam is Lawlor’s fourth slam at RWU, but says she has been performing in slams since she was 13 with a nationwide program called Brave New Voices.

Her first poem, titled “Maria: An American Gift,” is a poem calling out the gross negligence that occurred in the United States after Hurricane Maria. Lawlor says she was inspired by her Puerto Rican heritage and felt that it gave her a connection to the event.

Lawlor’s second poem, which won her this year’s slam, was titled, “Bath Bombs for Racists.”

“The piece actually came about from a Writers Anonymous meeting,” said Lawlor. “We all did a prompt where we wrote on one side of the whiteboard things that relaxed us and made us happy and on the other side we wrote things that bad us angry or sad. When the entire board was filled we had to pick a thing or topic from each side and write a poem and I picked bath bombs and racists and just wrote it.”

Though Lawlor finds it strange that a panel of judges decides who wins the slam after poets stand in front of them to bare their souls, she says she is honored to be a part of of the slam.

“I am incredibly lucky to be apart of RWU’s Poetry Slam because every slammer who performed on Thursday deserved to win,” said Lawlor.