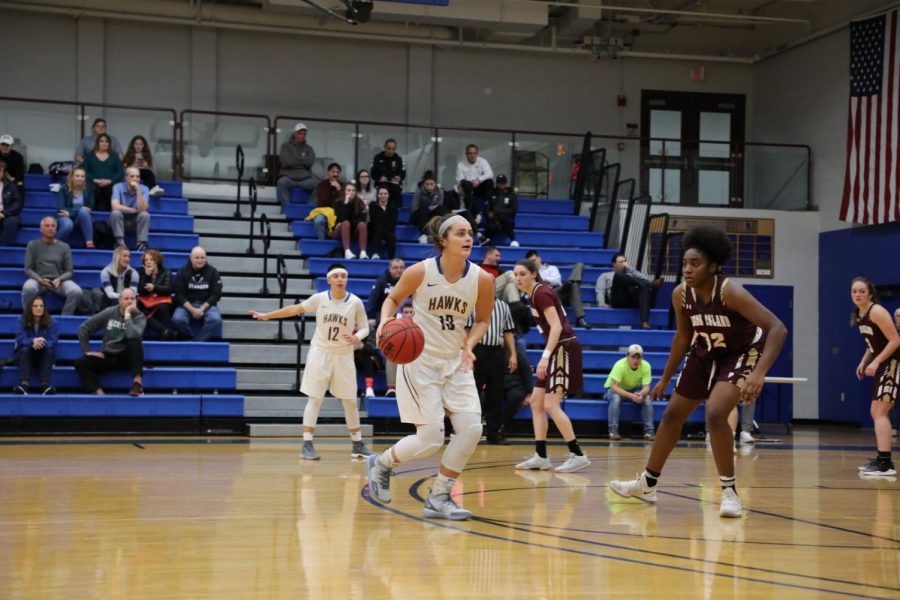 In their spirit of putting the community first, the women’s basketball team organized a Youth Day during their game against Rhode Island College on Sunday, Nov. 25.

An hour before the start of the game, families showed up for face painting and poster making for their favorite players.

During timeouts, the court was open to kids for shoot arounds and quick competitions.

The Hawks’ biggest supporters on Sunday were the players of the Mount Hope High School state champion unified basketball team. This was the team’s first championship victory, as they beat Woonsocket High School 47-34 in a game that, according to MHHS coach, was played the way unified basketball was meant to be played.

The players strutted their purple state champ shirts across the court at the half to be recognized individually and as a team. They smiled for photos and waved to the fans, but they were most excited to be cheering on the Hawks in a tough battle against the Anchormen.

Throughout the game, donations were taken at the door to support the Bristol-Warren School District Lunch Fund.

In April, Kim Kalunian of WPRI produced a story titled “R.I.’s school lunch debt tops $300,000.” Kalunian wrote about how “lunch shaming” has become a problem across the state where a student is publicly confronted when their funds get low.

This past March and April, Bristol-Warren was in lunch debt $907 — the lowest out of schools that answered Kalunian. Cranston had the highest debt of $32,592 in two months.

The stereotype is to provide a student in need with the malnutritious cheese sandwich. The Bristol-Warren School District Lunch Fund was designed to help provide students with better lunches that are better for them.

The women’s basketball donations provided Bristol-Warren with $205 and provided more awareness, which was what Head Coach Kelly Thompson was hoping for.