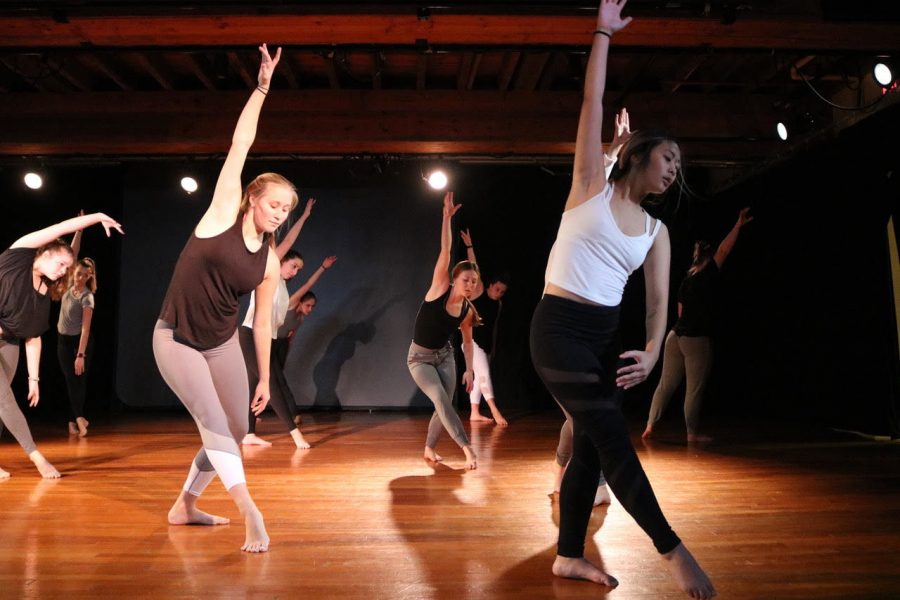 The stage was dark, the seats were filled and all eyes were focused on the silhouettes of dancers Katie McNamara and Olase Freeman.

McNamara and Freeman, both Rhode Island residents, have danced professionally for different dance companies over the years and showcased a self-choreographed dance performance in the Performing Arts Center on Saturday, Nov. 10. Before the show started, there was already a sense of excitement and anticipation from the audience. The majority of the seats were filled 15 minutes before the event commenced, yet more and more students piled into the room trying to find a good spot to sit and watch. The performance consisted of four dances and although the event only lasted a half-hour, it showcased an immense amount of talent. McNamara and Freeman had the freshmen of RWU’s dance theatre perform one piece which they had been working on for the past few months.

The first selection titled, “Wedding Dance” used an innovative combination of video and live performance that added a dimension of past and present moments coexisting in present time. A projector on the wall behind the performers played a video of McNamara and Freeman dancing at their wedding while, on stage, the two dancers mirrored the movements in the video. The choreography was light-hearted and playful which was seen as Freeman lifted McNamara several times and spun her around the stage. Their first dance contrasted with the next selection which was more serious. This time, McNamara performed a solo. Her ability to gracefully flow across the stage in one dance and transition to using more forceful and rigid movements for a darker piece was impressive. It was a strong display of her professional level of diverse talent.

“Spinal Engagement,” which McNamara choreographed, included RWU dancers and was one of the most intriguing works showcased due to the dancers’ patterns and movements across the stage. For most of the piece, the performers danced in unison and then broke apart in pairs where they performed jumps and floor work. Several times, individual dancers diverged from the group actions and worked their way across the stage with their own techniques. Although these individuals were not in unison with the other dancers, they shared the space between everyone on stage and kept the work connected. This piece was very lyrical and it was seen that the dancers undoubtedly spent a lot of time perfecting their art.

McNamara and Freeman’s dance performance was unique and thought-provoking. Their talent, as well as that of the RWU students, was skilled which made the event fun to watch. The style of dance was extremely expressive, and it was a performance worth having seen.