Men’s basketball looks forward to CCC tournament: Hawks are pushing for home-court advantage in first round 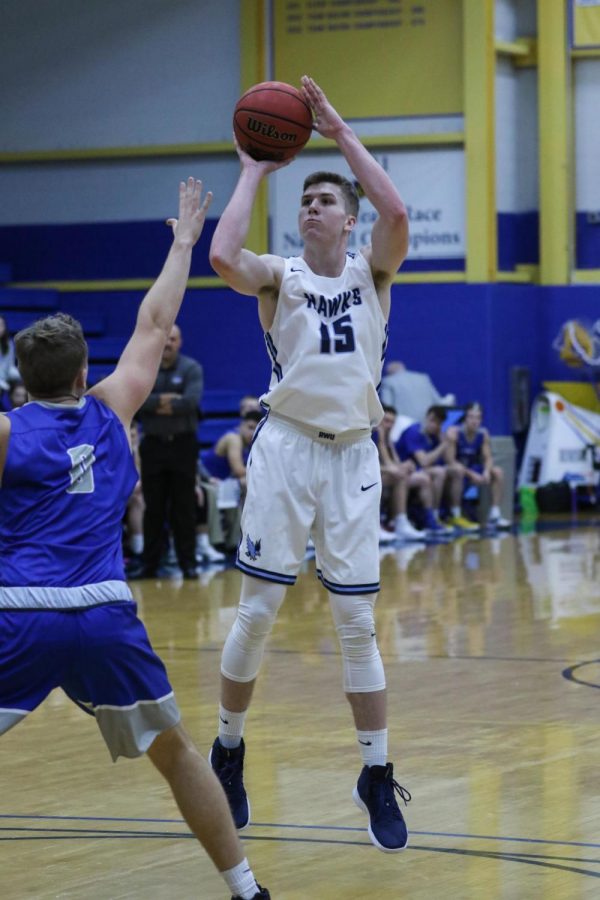 With one game left in the regular season, men’s basketball is pushing for a first-round home game in the Commonwealth Coast Conference tournament, which starts on Feb. 19.

The Hawks are 12-11 overall this season and 9-5 in conference play as of Feb. 12. They’re tied for third place with Endicott College, whom they squeezed out an 86-82 win against on Feb. 9.

Head Coach Michael Tully feels that their full season has felt like two separate seasons — their short winter break was the turning point.

“We’ve played much better since we’ve been back and I think we’ll continue to do that. The team is just a great team,” Coach Tully said. “They’re embodying what it means to be a team.”

They opened up their season with a tough loss to a strong Coast Guard team, but turned it around and grabbed a 20-point win over Worcester State University. The Hawks finished 2018 6-6 overall, but 3-0 in conference match-ups. In 2019, the Hawks have only played conference opponents and are one game over .500 during that stretch.

During this stretch, however, they’ve run into the two powerhouses of the conference, Nichols College and Gordon College, who are both 13-1 in CCC play. The first time the Hawks matched up against these two teams, they came within striking distance. The Hawks forced overtime against Gordon and only lost by three points. Nichols pulled off a five-point win on Jan. 16.

But the second time the Hawks met these daunting opponents, they lost their edge in the second half and fell in a big way. Although the Hawks were celebrating senior Austin Coene’s 2,000th career point at home, they couldn’t put together a full performance and fell to the Fighting Scots by almost 10. The Hawks led at halftime against Nichols on Feb. 5, but a 38-point performance by the Bison’s Marcos Echevarria, which included 11 three-pointers, led Nichols to a 33-point victory over the Hawks.

“One of the things we’ve addressed which has been an Achilles [Heel] for us in the second semester — we’ve played our best basketball since we’ve been back — however, in the second half of games, we haven’t really performed to the same level that we have or that we’re capable of… We have to mentally get over that hump,” Coach Tully said. “We seem to break down more [defensively] in the second half and that’s really what our focus is moving forward as we approach the playoffs.”

Obviously, the Hawks are relying on Coene, who is only 19 points away from breaking his own single-season scoring record, to push them to a CCC championship. But, according to Coach Tully, other players have stepped up tremendously.

“Everybody on the team has really embraced their role,” Coach Tully said. “What they do day in and day out collectively as a team is what makes them good.”

Senior Jake Heaton is close behind junior Rich Pugliese in three-pointers made. Sophomore Drew Hart has been a force under the hoop by pulling down 109 rebounds and averaging 9.7 points per game. Sophomore JJ Pfohl has started 22 games and freshman Eli Harris has been a pleasant surprise off the bench.

The Hawks finished their season this week against Curry College and Endicott College, whom the Hawks defeated in their first match-ups, which will determine their seeding for the tournament. Unless they fall to the fifth seed or below, the Hawks will host at least one game in the first round.

“Our team believes that we are at the top of this league and if we play our best consistently, we will win,” Coach Tully said.