Shay Seeks National Title: The nationally-ranked wrestler is competitive, grounded and well-rounded which has influenced his success 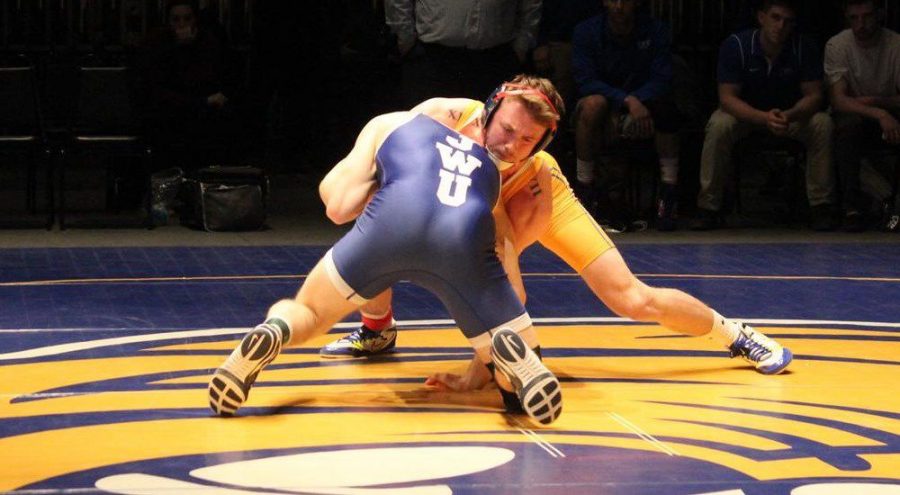 He describes himself as superstitious. He wears the same pair of compression shorts and socks for each match and listens to the same three genres of songs before he competes.

It must be working for him– Shay is ranked second in the nation for Division III.

Junior Taylor Shay prepares for his wrestling matches by listening to classical, Hip-Hop/R&B and electronic music.

“The classical music helps me calm down before I compete. I usually listen to the ‘Star Wars’ theme songs,” Shay said. “For Hip-Hop or R&B, I listen to Ja Rule or Nelly, and the electronic song I am currently using is a song called ‘Apple Juice.’”

Shay has been wrestling since he was in second grade. His father, Chris, who is certified in martial arts, thought wrestling would help build a foundation for that, so Shay and his brother both began wrestling.

“We both did it for two years and we fell in love with it. We have both been doing it ever since,” Shay said.

Shay’s father described him as very athletic when he was younger. He played a bunch of sports, but he explained how he knew wrestling would be good for him since it had a team aspect, but it also had a sense of individuality when competing.

“I noticed Taylor would get frustrated when he would compete in sports and they would lose as a team. That helped make the transition in wrestling easier because if you lose, the loss is on you and as a competitor, you learn how to overcome that,” his father said.

Shay’s father also said that wrestling was the way his son got his energy out when he was younger.

“Taylor had a lot of energy when he was younger, wrestling was the way for him to get all that built-up energy out,” Shay’s father said. “When Taylor would wrestle on the weekends, it made him feel good and it was something he looked forward to. It helped him focus and perform better in other things such as school.”

Shay talked about how his father is his biggest supporter.

“He is crazy, I love him, he has always had my best interest in mind,” Shay said. “When I wrestle well, he is there, when I wrestle bad, he is there. He always wants me to wrestle to my full potential. He’s never sugar coats anything, he will tell me what I need to work on.”

Shay has been working very hard this season to achieve his goals. His motivation this season is a loss that occurred last year in a match where he had been named an All-American.

“Anybody would have said I won that match, but I lost in the last 7 seconds. That feeling after that loss has never left and it has been my motivation this season to get back and be successful,” Shay said.

He’s avenged himself this year and beyond.

“I’m not sure if it has not set in or if I am trying to keep that in the back of my mind, opposed to letting it get to my head,” Shay said. “But whenever my family or friends talk about it, that is when it really hits me.”

When Shay is competing, he doesn’t really think about the ranking.

Coach Egan believes the way Shay lives is something he pushes for the other wrestlers on the team to live up to.

“There are a lot of things going on in Taylor’s world and I try to push that to all our kids. You have to chase something else and have to be involved in other things rather than just the sport,” Egan said.

There are 3 matches left for the wrestling team. The Futures Tournament on Feb. 17 in Hartford, Conn., the Northeast Regional Championship on Feb. 23, and the NCAA Championship March 8 in Roanoke, Va.