Hawks push past Bears in playoffs 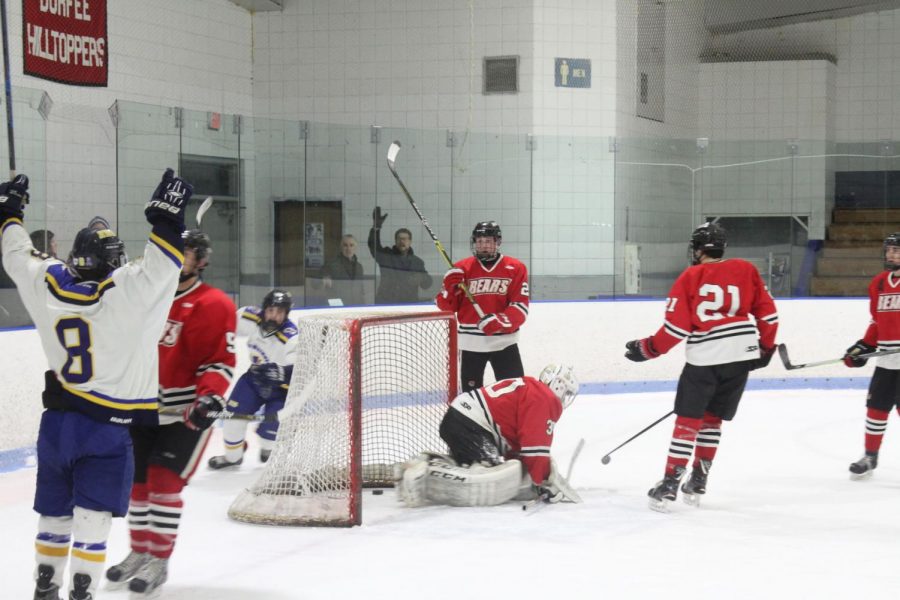 FALL RIVER, Mass. — The hockey team played their one and only home playoff game Thursday night against Bridgewater State University. As the top seed, RWU hosted in Driscoll Arena for a chance to earn a spot in the next leg of the tournament in Nashua, N.H.

In the two regular season games these teams played, the Hawks scored four goals. This time was no different, as their four goals were enough to win the game 4-1.

As what is usually the case with this Hawks team, they felt out their opponent for the first half of period one. Although the two had met twice in the regular season, playoff hockey shoves aside any familiarity. It took until around the 10 minute mark for the Bears to get a clean chance when one forward snuck through the Hawks defense and caught a pass with only Ryan Shea to beat. Shea dropped and took away a great scoring chance from the visitors to keep the game even.

The Hawks offense broke through for the game’s first goal following a shot that rebounded off of BSU’s Christian Cellini and onto the stick of senior Jeremy Lawton, who potted the loose puck.

The Bears came back quick and had a golden chance when a penalty shot was awarded to Mike Jessman. Shea faced him the whole way, then dropped down to deny Jessman’s shot with his left pad.

The key stop was never a worry for Head Coach Michael O’Brien.

“We were preparing for the defensive zone faceoff because Shea was so awesome at practice this week,” he said. “It never crossed my mind that he was going to give a goal up there. It was easy for him.”

In the second period, sophomore Nicholas Hart and junior Jarod Florian both notched goals to make it 3-1.

Bridgewater State got one past Shea later in the second, but that was all they got.

Senior Will Sauerbrunn was the only player to score in the third period, but the game still had over half a period to play.

Without much hope left in winning the game, the Bears turned to more physical play. Before one faceoff, BSU’s Dylan Burns chopped at sophomore Griffin Gagne’s legs, causing him to lose his balance. The action was carried out again, even after a verbal warning from the referee. He was still not called for it.

The physicality of the Bears served as both an outlet for being outplayed so badly as well as a way to get the Hawks to retaliate, then draw penalties to try to get back into the game. RWU bit a few times on this tactic.

“From the beginning of this season, we’ve been talking about keeping our mouth shut,” O’Brien said. “We take a five-minute major [penalty], that’s not really our game. We can’t do that in the playoffs.”

In the third, Michael Tabb found himself confronting a much larger BSU skater. The Bears player repeatedly cross-checked Tabb in the facemask until officials tried to break them up. Each of the ten skaters on the ice grabbed a hold of someone wearing an opposite-color jersey and after a short time, Thomas Martin, the one who started with Tabb, was ejected.

The Hawks will travel north for their game Saturday afternoon. A win on that day would mean a trip to the championship game.