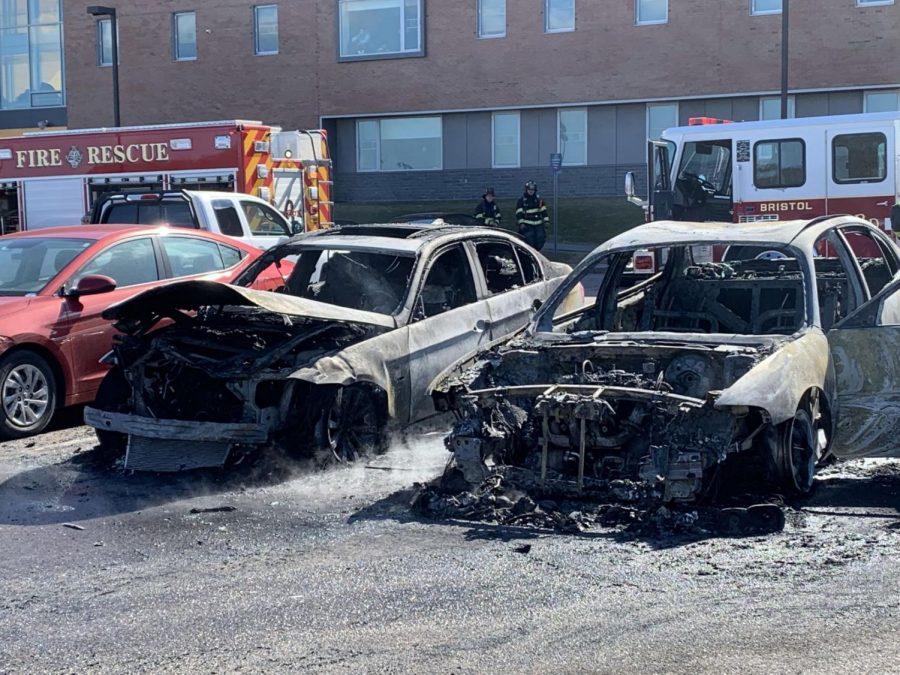 At approximately 2 p.m. on Monday, March 18, a 2001 Buick Lesabre caught fire upon start-up. The car soon was engulfed in flames, along with a BMW which was parked adjacent. Bristol Police Department and Fire Department responded to the scene of the fire in Lot D — which neighbors North Campus Residence Hall. No one was injured.

“I got in my car and I turned the ignition and the engine popped like a gunshot. Soon after it started smoking — which has happened before,” owner of the Buick and RWU undergraduate Ian Malloy said.

Malloy noted he was already out of the car when he saw flames peak out from under the hood, and called 911. Soon after, the car became engulfed in flames, and the BMW parked adjacent caught fire as well. The owner of the BMW,Law Student Katarina Vorachack, declined to comment at the scene. A red Hyundai sedan, parked next to the BMW, owned by wrestling coach Jon Egan, received minor body damage as the paint and body melted from the extreme heat that the fire caused. Director of Public Safety Steven Melaragno said that the damage to Egan’s vehicle was on the driver side.

While the incident is still being investigated, firefighters told the Herald that one entity that may have made the blaze larger was the presence of magnesium in the passenger seat of the car, but neither Malloy nor the firefighters know where the traces of magnesium could have come from — aside from the materials of the car itself. Melaragno said the vehicles were moved off campus for safe keeping.

The 2001 Buick Lesabre was recalled three times by GM, in three separates recalls, comprising 1.4 million car recalls in 2007, 2009 and 2015. The reason for the recalls was due to the “risk they might catch fire.” While Malloy told the Herald, his family was not in possession of the car in 2007 or 2009, he does not believe the car was brought in for the 2015 recall, but remains not entirely certain.

“It is a good thing he did not park in the garage. It would have been really hard for us to get to,” the firefighter said. “Who knows, 10 cars could have caught fire there.”