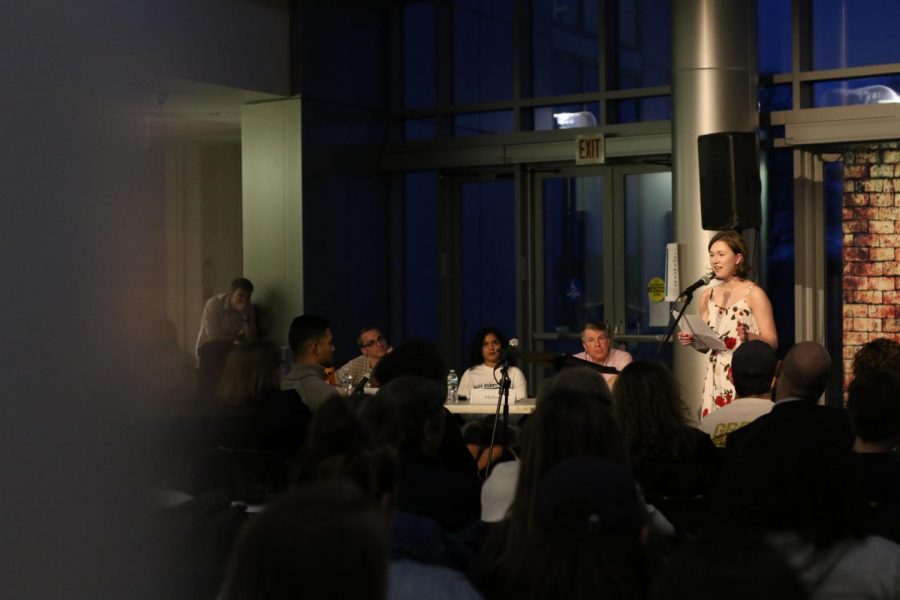 Sophomore Katherine Weir is no stranger to slam poetry and she let her audience know this when she performed her original poem “Switchblade Women Will Cut a B***h” at the Spring Poetry Slam held on Thursday, April 4. Weir started writing poetry in high school to relieve stress and, this past year, auditioned for the fall poetry slam but didn’t make the cut. Realizing what she wrote wasn’t necessarily a slam poem, Weir took her anger from not getting into the show and used it as a drive to write a rousing slam poem for her spring audition. It took this poet four months to perfect, but her hard work truly paid off.

Weir’s poem highlights the idea of how she had to fight/cheat her way to get an advantage in life because not everything comes as easy for women. In order to prepare for the performance, Weir said that all selected slammers attended writing workshops. Two or three workshops before the show, contestants got down to the nitty gritty details and finessed what they would take to the stage.

“My favorite part was being able to share experiences and be able to give a message to such a large group of people,” Weir said.

Now, each of the fifteen contestants not only performed an individual poem but were a part of a group poem. According to Weir, out of both performances, she preferred the group poem because it was nice to have a backbone of other people supporting each other. She also liked having sporadic lines to say so she could listen to her other group members and admire what they were doing.

When asked if she’ll participate in next year’s poetry slam, Weir quickly responded, “yes, definitely.” She also commented that anyone who has thought of trying out for the poetry slam but was too timid to do so should still try out.

“Everyone who does it is insanely nice, and they give the best feedback,” Weir said.

So, next fall, keep an eye out for poetry slam auditions because, like Weir said, it is totally worth being a part of it.