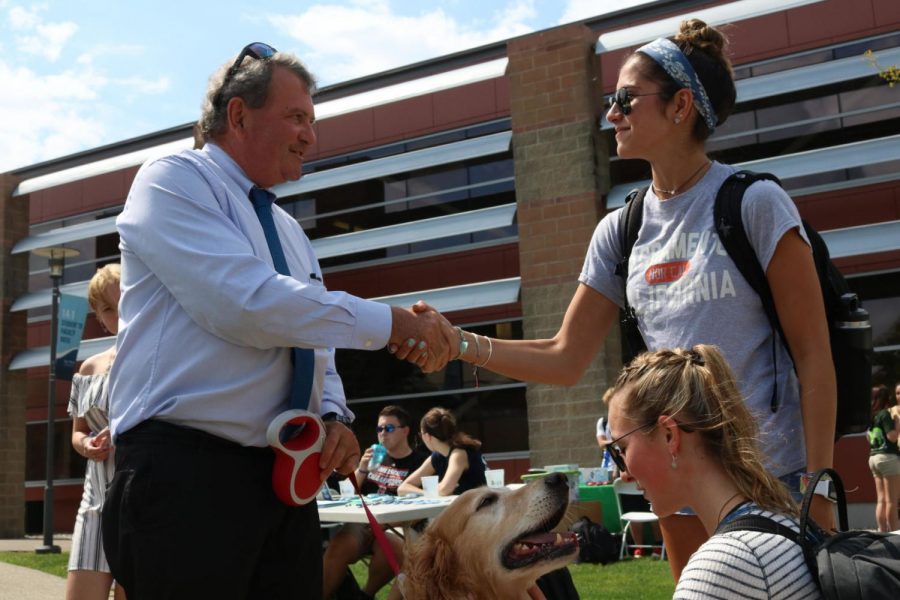 Students talk to President Miaoulis and pet his golden retriever Fletcher at the Sept. 4 Involvement Fair.

Roger Williams University’s pet policy states: “The University believes that the practice of allowing pets on campus can lead to adverse situations. Therefore, unless the animal is needed for a specific function (i.e., a theater production, trained seeing eye dog), the University prohibits bringing pets on campus grounds and in buildings.”

Miaoulis’ golden retriever Fletcher has made frequent appearances on campus, including greeting students at the Sept. 4 Involvement Fair. The dog also has a Twitter account — @RwuFletcher had 149 followers as of Sept. 11.

In an interview with Herald editors, Miaoulis said he hopes to change the pet policy to allow students to be able to bring their dogs on campus. He thinks it could enhance the campus experience for everyone, as long as it is safe for the rest of the community.

“One of the things I’d like to change right away is the dog policy,” Miaoulis said. “We are working on changing the policy, so within certain rules, students could bring their dogs on campus, if it would be safe for the rest of the people…”

Since taking office on Aug. 19 as the university’s 11th president, Miaoulis has adjusted well to the Bristol community and said he truly loves living here. Some nights he hangs out in local restaurants, like Aidan’s or The Lobster Pot. On a recent Thursday night, he and his partner Heidi Maes had dinner at Bristol House of Pizza.

“On the way out, we saw all the students walking toward there and it was for Thirsty Thursday. There was a huge line. Some of the students recognized us, so I said hi and that was fun,” Miaoulis said.

According to the president, there might be a day when he decides to join in on the fun.

“Maybe one day I’ll come and explore the party,” Miaoulis said. “I would love to come.”

No plans yet for land acquisition

The university recently bought 17 acres of property, known as the “Wind Hill” property, at 55 Ferry Road in Bristol. Miaoulis said there are no plans yet for the purchased land but the university is undergoing a master-planning process for the entire campus.

“In my mind, there are other priorities that concern me more like renovating dormitories and academic spaces,” Miaoulis said. “However, if a great opportunity, idea and funding comes for the new land we’ll jump at it.”

The university recently ended its policy of freezing tuition for four years for incoming students. Miaoulis pointed out most of the university’s money comes from tuition.

“If you freeze tuition, you cannot do any new programs anymore, or you cannot pay the faculty, staff — even at inflation,” he said.

The president has some ideas for the future of the student body as well.

“The campus, when current freshmen graduate, will be an even more welcoming campus for students from all races, ethnic origins, sexual orientation,” Miaoulis said. “It would be a campus that everybody would like to come to and thrive.”

Student diversity is extremely important to the president. He notes that the university has made great strides regarding this issue in recent years, but he wants to go even further.

President and a foodie

One of the things RWU is most known for is the food provided by Café Bon Appetit. President Miaoulis quickly discovered why it is so popular.

“I have actually had pretty good food there. It’s a dangerous place because you can gain a lot of weight going there, you know,” he said. “I don’t want it to be the freshman 15 and the president’s 40.”

If this were to happen, the president would probably agree it would be because of the seafood casserole. Although he only had it one time, he compared the meal to that of a gourmet restaurant. He said the seafood was very tasty, although he enjoys many other meals at Commons.

If students see Miaoulis eating his seafood casserole next time they are at Commons, he said they should consider going up to him or sitting with him for lunch or dinner.

“Sometimes I sit there by myself and people look at me,” he said. “It would be nice, if you know, when I go… to have students come.”

When thinking about the legacy he wants to leave at RWU, Miaoulis had a few different ideas.

“Some of the things that I hope will happen will be a university that is much more externally focused than now, that will have partnerships with corporations, foundations, have a national board of trustees and have much more philanthropic sources pouring into the university. At least ten times what we have now,” Miaoulis said.

New initiatives and policy changes aside, the president made it clear that there is one population at the forefront of his mind.