What it takes to win: A coach’s secret behind a successful season 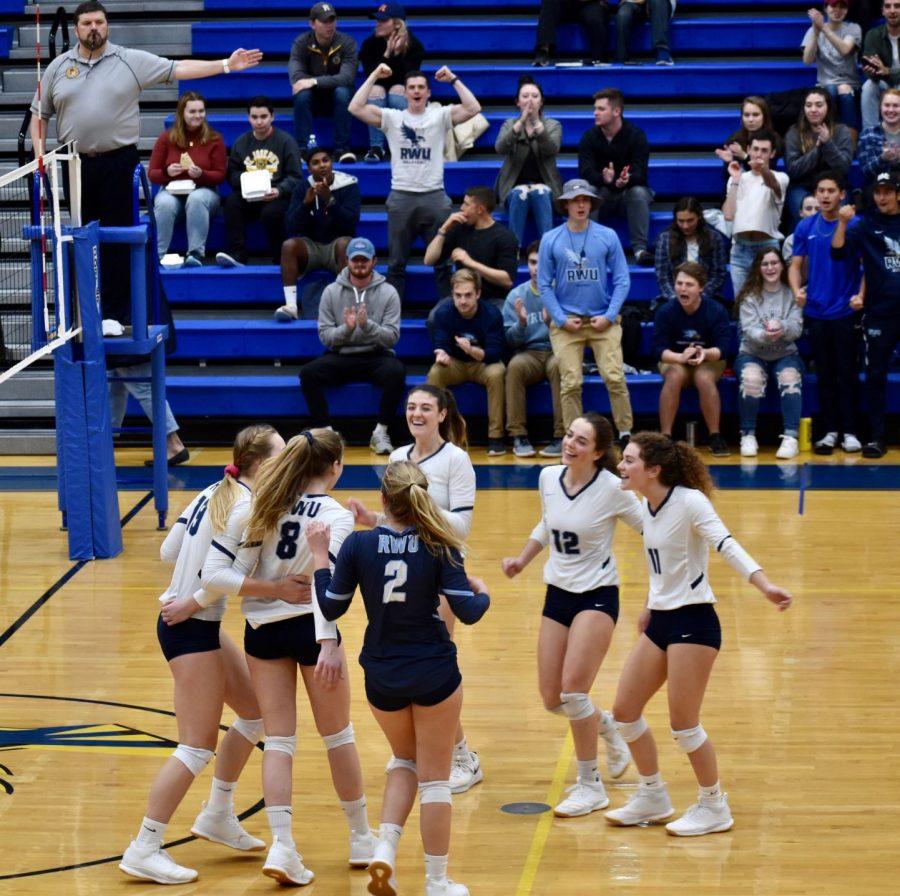 Volleyball scores and comes together to celebrate during a game.

Behind every team is a coach, but what does it take for a coach to have a successful team?

The Women’s Volleyball team went 6-2 in conference games this year, but got shut out by the Endicott Gulls on Nov. 9 in the Commonwealth Coast Conference (CCC) Championship. Soubliere said making it to the CCC Championship was one of the team’s goals.

“We definitely had a bigger goal in mind, but that was a step to get there,” Soubliere said.

“For them it was taking it one game at a time, knowing that one game was one step closer to their ultimate goal and that they had to work together in order to achieve that ultimate goal.”

This was the third year in a row Women’s Volleyball made it to the conference finals. Although they lost, they kept the success of previous players before them going.

In order to keep them motivated, Soubliere had them write down an excuse or fear they had and put it in a little, wooden boat. These boats were then burned.

“Like, ‘hey we have let it go,’” Soubliere said. “It’s dead now, so what’s stopping you from reaching that goal?”

This concept of letting things go and moving on was one of Soubliere’s lessons throughout the entire season. It was not about losing and being upset, it was instead losing and thinking about what they could learn from it.

Soubliere is already planning to make some changes for the spring semester. However, it has nothing to do with skills.

“It just needs to be more of that mental toughness that we have to get through to kind of push back at other teams,” Soubliere said.

To become the successful coach she is today, Soubliere said it is important to learn from the team.

“Every day, every week is going to be different, but what do they need in order to do and be at their best?” Soubliere said. “That could be anything from on the court to off the court. How can you pull the best out of them?”

The Field Hockey Team ended their season with an overall record of 12-10. This is the first time the team has made it into the semifinals since 2015.

“Our success was based on being as consistent as possible in our preparation and throughout the season,” Blackhurst said.

Blackhurst said the team knew what they had to do in order to achieve success. The team was making sure they were competing in practice the same way that they would compete in games.

“In practice, we were making sure every touch on the ball was the best touch we can possibly make,” Blackhurst said.

The team had many different components that motivated them to compete at their highest level. Some of these involved how they wanted to make their families proud and prove to themselves they deserved to compete. Finally, they wanted to show the CCC’s what their team was all about.

“We made sure to acknowledge the little things and say ‘hey these are things we did really well. We all have to recognize that and be proud of that.’”

In the semifinal game, the team competed against Endicott. They fell to the Gulls, losing 4-0.

“We are staying true to our expectations and team rules. During the off season, we are putting in the necessary time and work to improve our individual skills,” Blackhurst said.

Overall, Blackhurst believes the most important thing a team can do in order to have a successful season is pay attention to the details.

“If you want a team to achieve success, you want to make sure they are creating good habits and setting up their teammates for success along the way,” Blackhurst said.