The story behind the ink 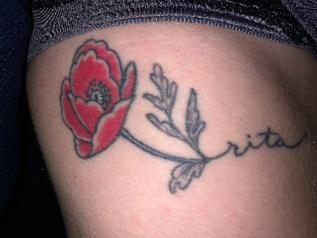 An inspiration based on Towle's grandparents.

For thousands of years, tattoos have been an expression of artwork on bodies worldwide. The power of art, such as these tattoos, serves as a wonderful reminder of what we choose to hold close to our hearts. Today, people get tattoos for a variety of reasons: artistic freedom, rebellion, spiritual or cultural motivations and sometimes just for the fun of it.

Many RWU students have gotten tattoos. The stories behind the ink for the following six individuals are prime examples of the significance that tattoos often hold.

Freshman Savannah Patterson took inspiration from where she came from in her two tattoos. Hailing from Block Island off the coast of Rhode Island, Patterson has spent every summer on the beach.

“I have a love for the ocean and swimming. It is also a representation of time spent with family,” Patterson said of her wave tattoo.

Her second tattoo, a crescent moon, matches with her mom. Using the quote “I love you to the moon and back” as an inspiration, Patterson talked of her future plans for more tattoos. Her mother has two stars that represent her two children.

“I will add stars to mine when I have kids,” Patterson said.

Freshman Tiana Adams started her collection of tattoos in March 2019, acquiring the outline of New Hampshire with trees and mountains inside of it. She was motivated to get this tattoo because she was born and raised there. Her love for the state is reflected in the artwork.

Next, Adams got a tattoo of a palm tree because of her love for the beach. Her third tattoo, which consists of flowers, is her most recent addition.

“I got the flowers because each flower is one of my families birth flowers and they mean the world to me,” Adams said.

Sophomore Lindsay Towle decided to get her first tattoo before she started college. After contemplating getting one for a while, she decided to take the leap of faith once she was sure that the ink would mean something special.

“I like tattoos that have meaning because it ensures that I won’t regret it later on,” Towle said.

The first tattoo, which she got in August 2018, is of a poppy flower on her rib with her grandmother’s name as the stem. Her grandparents played a large role in her life before they passed away. The flower represents remembrance, specifically of war veterans. Her grandfather, whom she called ‘Poppy,’ is represented in the flower. Her grandmother’s name, ‘Rita,’ reminds Towle of the woman she is so often compared to.

“My family always tells me I have the same personality and interests as my grandmother, so I knew I wanted to get a tattoo in memory of them,” Towle said.

Her second tattoo, which she got a few months later in October 2018, was an expression of her struggles at the time.

“I was going through a really hard time and the only thing that really helped me through it was my faith,” Towle said.

In this way, her tattoo with “walk by faith” engraved onto her foot serves as a permanent reminder to rely on her spiritual and religious faith when times get tough.

Sophomore Chris Gallagher was inspired to get his first tattoo, a Celtic knot, because of where his family came from. As an expression of national identity, the knot is representative of many things to him.

“My grandfather, before he died, gave me a necklace of the same knot when I was younger… it’s a great reminder of him,” Gallagher said.

He got the ink last year around Thanksgiving, which is a similar design to one that his mother has. He is planning on adding more to the design as well as additional tattoos apart from this one.

Junior Tatevik Khachatryan has a similar motivation to that of Gallagher. Her tattoo depicts the coordinates from where she was originally born and raised: Yerevan, Armenia. She got the ink in August 2019 to pay homage to where she came from.

“I wanted something meaningful, but different… having this gives people a reason of asking me what it means and me having the ability to express where I am from and tell them about the wonders that Armenia has to offer,” Khachatryan said.

The coordinates represent a piece of her that she can never shake.

“I am proud to represent it as a form of art on my body,” Khachatryan said.

Senior Mary Santoro’s first tattoo derived from a spark of creativity she had after beginning her studies here at RWU. She got her tattoo of a daisy during her freshman year, along with one of her good friends from her residence hall. She wanted not only to capture their connection with the artwork, but also see if she would be able to tolerate the pain of getting a tattoo.

“We always would use Daisy perfume by Marc Jacobs… She was one of the first friends I ever made here and has such a special place in my heart,” she said.

After having the first one done, Santoro was addicted to getting them.

“I would absolutely get more.”