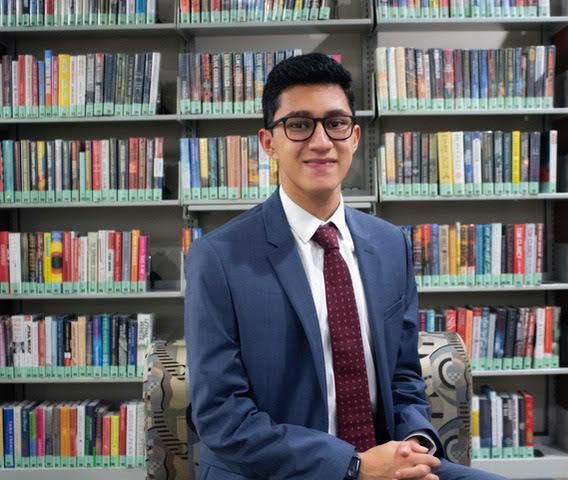 Sophomore Samuel Avila has been elected to the role of student body president for the 2020-2021 academic year.

COVID-19 has put a halt on campus operations but it has not stopped the election of a new student body president. An eager current sophomore is ready to step into the role.

Samuel Avila will act as student body president as a junior in the fall. This position is usually held by a senior, and Student Senate Advisor Adrianne Harris said Avila’s feat has not happened in several years. Eligibility for the role was not affected by his class year because the Student Senate Constitution states that candidates must have served on Senate for no less than two academic semesters. This spring marks Avila’s fourth semester with the group.

With two current juniors running for the same position, Avila knew it would be a competitive election, but he also realized he would be ready to take on this role and work for the student body despite his class status. He is happy he will be able to connect with students for two more years and thinks there are other benefits to having a junior in the role.

“I think the difference [with being a junior] will be the investment of making sure we can get initiatives through the Student Senate,” Avila said. “For me, just knowing that the decisions made next year by the Student Senate will still impact me essentially for the next two years. That adds to my internal decision making.”

Avila already has goals set out for the upcoming school year. He wants to work to make campus a more inclusive community for prospective students. He also wants to get Senate’s name out there and work on connections with university administrators so there is a good base of contacts for senators to reach out to.

He is excited to work with all of the newly elected general senators. There were a lot of initiatives in the works last year that he hopes to continue working on with this group, such as a potential partnership with Big Brothers Big Sisters for clothing donation drives. Avila also realizes in the wake of COVID-19, many students will likely have concerns when they return to campus in the fall.

“Everyone’s being impacted by this. I hope students will now feel comfortable coming to the Student Senate because we have been duly elected to hear their voices. I want to work hard for them, to tackle on those concerns… I hope the Senate is with me on that.”

In terms of improvement, he hopes to inspire more teamwork and increased collaboration between the different Senate committees.

Avila has gained experience in various Senate leadership roles throughout his time so far. He served as Academic Affairs Chair in the spring of 2019. One of the big initiatives he worked on then with Vice Provost Robert Shea was the inclusion of emergency guidelines on syllabi, which started last semester. He currently acts as the Parliamentarian for the 2019-2020 school year.

Given his past experience on Senate, Avila said this year’s shift to online campaigning was very different from the experience of prior years. However, he thinks the organization benefitted a lot from this method, because candidates were able to get information out to a lot of people via platforms like Facebook and Instagram.

“I think it was still very effective because we were able to present the work we’ve done and what we want to accomplish moving forward,” Avila said. “It was definitely different but overall it was still a good experience.”

Outside of his work for the Student Senate, Avila is a public health and political science double major. He is an orientation advisor and a resident assistant who will be working in Maple Hall this fall. He enjoys watching Netflix, reading and writing in his free time.

Avila will officially be sworn into his new position on May 4 when the Senate transitions to Senate 47. He is looking forward to beginning important work.

“I hope we can continue that [last year’s] work together and work in the spirit of cooperation and teamwork. I’m very excited for that.”